I'm in blog catch up mode, Coco went back to school today, Henry has finally succumbed to sleep - he likes to have a good 'ole chat with monkey and, more weirdly, with the monitor, before he drops off these days, "ssshhh monkey, NO talking, sleep time" he says (over and over again) so I have a full hour in blog-land before school pick up time. 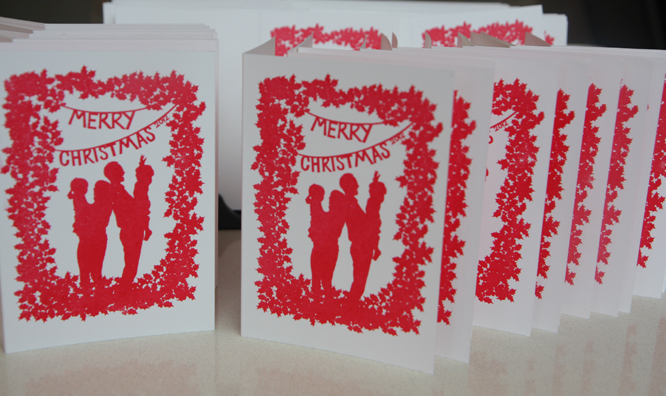 So, I'll start at the beginnning.
Before Christmas.
I was ill, I think it was almost flu. The whole week running up to Christmas was a wipe out - in as much as it can be in the week running up to Christmas, there were certain things that just had to be done, and one of them was to make our Christmas cards. Which I did, just (pretty much the same as last year). I think most of them were probably delivered after Christmas. I am truly useless without a deadline, it's just something that I'm going to have to come to terms with. 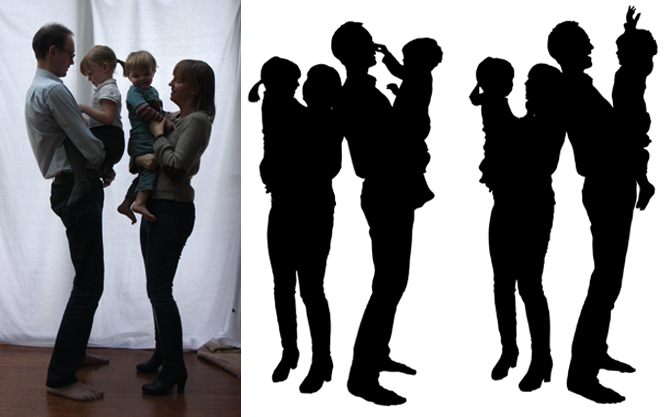 We were quite well ahead with our self timed family photos... can you tell when we did them? Yep that's Hugh in his work clothes and Coco in a school uniform, so that's about 8.28am then.
It's actually quite hard to get the children not to look at the camera, as of course we needed side profiles but luckily we got a couple of shots that worked... it took a while to decide between these two. Credit goes to Hugh for the photoshop-cutting-out job well done. 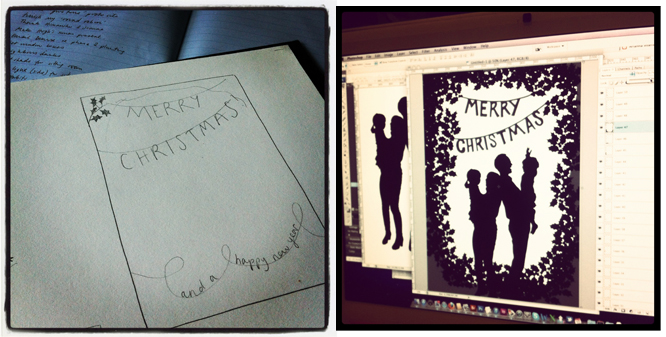 Then I started musing on the rest of the design, and we settled on a holly den with bunting, although thinking about it it wouldn't be very fun hanging out in a holly den with two small kids, bound to end in tears, but there you go. 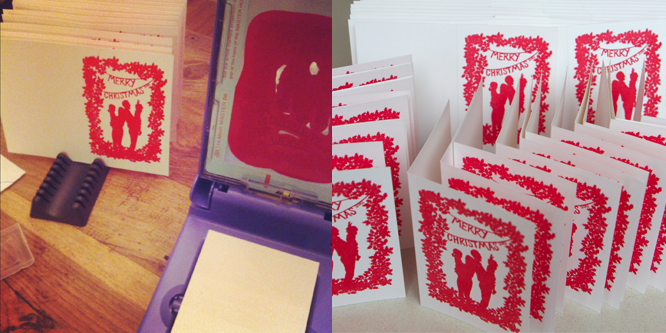 The next part of the process had to wait for 24 hours (due to needing Hugh to print out the design at work and bring it home again), but with a mere 36 hours until the last posting date out came my trusty GOCCO. I do love my Gocco.
Printing in progress, and sixty cards dry and ready to write the next morning.

So that was it. Our third silhouette card, I'm not sure whether or not to keep up this series for next year... I wonder if it's just all a bit self indulgent? Then again, aren't we allowed to be a bit self indulgent at Christmas - and I didn't put in the round robin letter that I had actually made/written! Oh well, I've got 12 months to make the decision, which, lets face it, I won't make until the last possible moment.

I have a few more festive-related posts planned, but not too much... On Christmas day I didn't pick my camera up once. Which is a shame now, but at the time we were just all enjoying ourselves. Plus, you don't want to see photos of us in our pj's do you?

This time last year:
A post about all my posts. Don't let anyone tell you I don't like a good look at my navel from time to time.
Posted by Alexis at 14:56

Labels: Birthdays and Celebrations, gocco, Homemade Gifts and Cards, Homemade Stuff, Projects, something i made