The story of Henry's Cake

A long time ago, when Henry was just 9 months old we had a lovely chat with one of Hugh's family friends about kids and language.

She has known Hugh since he was born and was commenting on how good his language was when he was little. I knew he was a bit of a chatterbox at an early age as his Mum kept a list of all the words he could say at 18 months - and frankly it's about 20x more than either Henry or Coco could say. But most impressive was the story of Hugh's first birthday.

Tractor, was apparently one of his first words, so a tractor cake was made, naturally. And this tractor has a female lego figure as the driver. When Hugh was presented with the cake and asked what it was, instead of saying 'tractor' as everyone expected he said 'lady driver' (or something... maybe 'lego lady driver' or 'lego lady' but you get the gist).

After this tale was recounted, I looked at the 9 month old Henry and realised that there was NO WAY he'd be speaking like that in a mere three months, and indeed it did take about another nine before he really started to chat away. I seem to remember lots of 'Are you sure it was Hugh's FIRST birthday' comments - but we were assured yes it was.

Then, a couple of weeks ago, when we were at Hugh's parents house we were doing the inevitable family photo album inspection when I saw this photo: 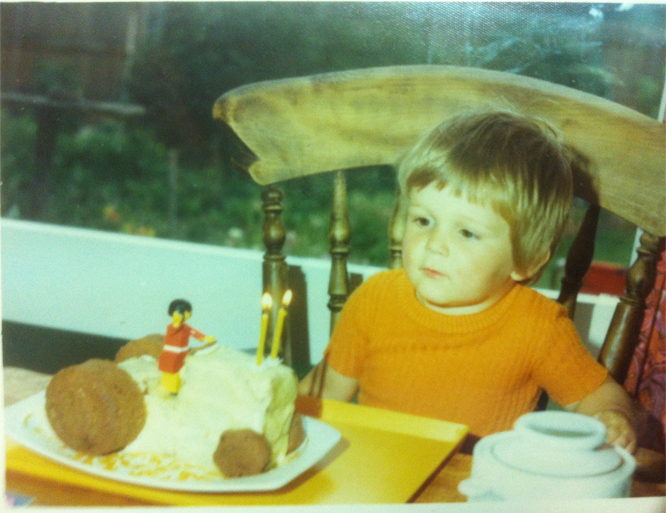 Now, readers... how many candles are on that cake?
Yep, 2!
Hugh was not a child prodigy (well he might argue with me on that point). He had a tractor cake for his second birthday! Maybe my children aren't the dunces I thought they were afterall. 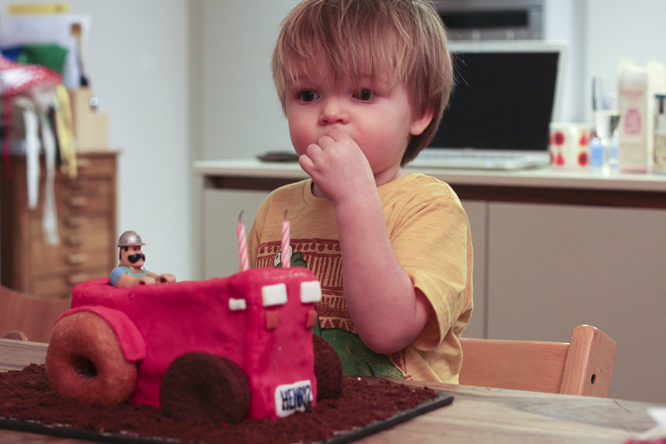 In honour of this, we felt we had no choice but to make Henry a tractor cake for his second birthday, and Hugh did a pretty good job. We broke with tradition and used one of our 'vintage' village people I mean, fisher price builder character, as the tractor driver.

Henry was suitably impressed with his cake, which took about an eighth of the time to eat than it did to make.
Posted by Alexis at 10:00

Labels: Birthdays and Celebrations, Homemade Stuff, Motherhood and Family Life, something i made