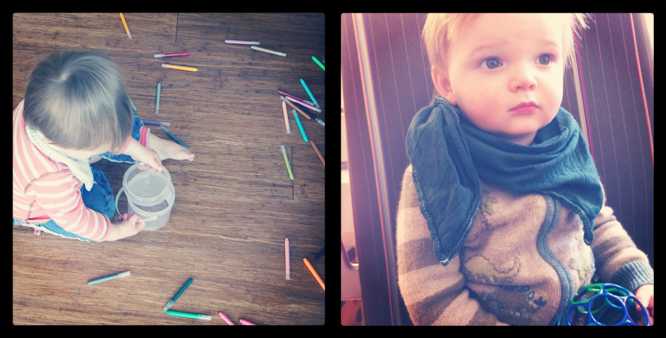 So Henry is 15 and a half months now. No longer a baby at all really...
In the style of Madeline, I thought I'd do a little update of what he is like now, as I know he'll be changing so much in the coming weeks and months.
I feel a bit like he is the classic second child, slightly left to find his own entertainment. One of his favourite things is cleaning his teeth, and if he disappears upstairs it's more often than not to the bathroom to stand on the stool and try out all the toothbrushes. He is also into wheels and pushing cars around - or the pink toy buggy (like Swann) he's not fussy! 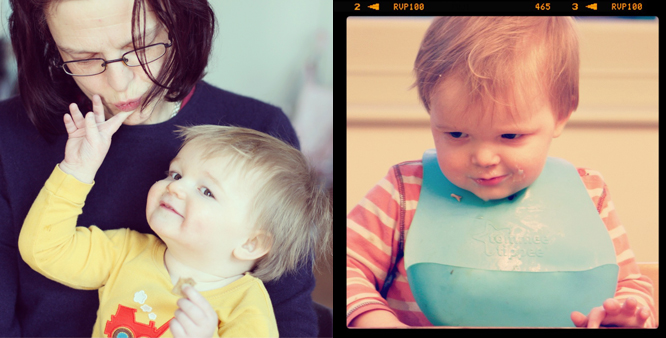 A few weeks ago he had a little phase of doing a sort of coy look at people from under his eyebrows - very 1950's starlet, and if either Hugh or I told him off for something he'd automatically put his head down, like a little puppy. 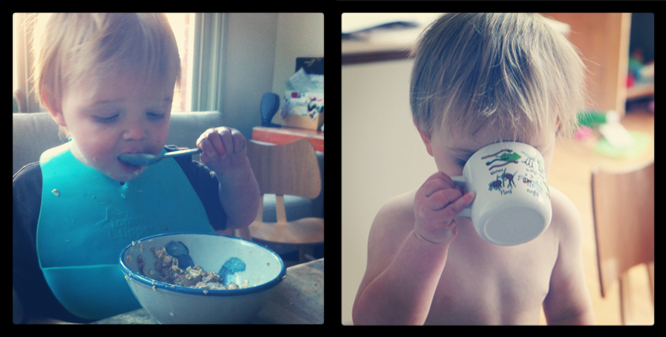 Somehow, without me really noticing when, he has started feeding himself.  It was only a couple of weeks ago that he managed to get some food on his spoon and then too his mouth successfully - in fact I think Hugh and I were both amazed and had a 'did you see that too?' moment. Now he's polishing off a whole bowl of weetabix without much parental intervention. It's messy, and his hand still gets quite involved… but he's doing it.
He prefers drinking from an open cup, and is pretty good at it, except when he's not and then we end up with mess and wet clothes.

Every opportunity is taken to get into mischief. Toys are boring, he's much more interested in kitchen drawers (likes the drawer with cans in and he uses them as building blocks). Noise is GOOD, and banging saucepans around or generally slamming things is a popular activity.
Climbing up on anything... the episode above was particularly disruptive as I'd just moved a load of wet paintings to a 'safe' place.
Taking lids off pens and drawing or 'mark-making' if we are going to use the accurate term - is pretty fun for Henry. He got very frustrated the other day when trying to take the lid of a crayon. Didn't quite get that one. 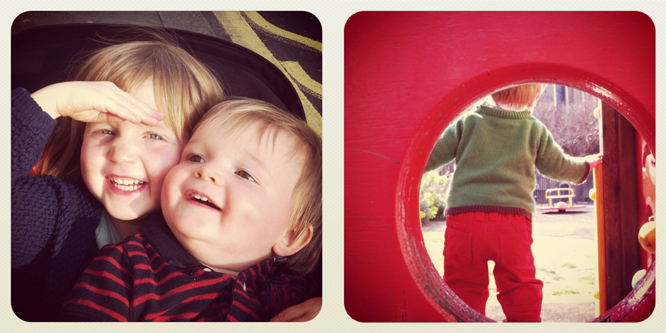 There are some cute bits of behaviour that he has learnt from Coco, like her he runs to the door when the doorbell goes - less a pitter-patter of tiny feet, more stomp stomp stomp. And then he tries to escape. Probably to the playground, which he loves, the slide is still his favourite, but he also likes trying out other kids scooters - something I remember Coco doing.
Like Coco he likes a bit of a dance... no particular favourite music yet, the same sort of cute knee bending/wiggle is performed whatever the tune.
In terms of speaking we are getting lots of chatter, not much is decipherable. It definitely sounds like he says 'bye bye, see you later' and Coco is pretty certain he says her name and now refers to herself as Dodo when talking to him. 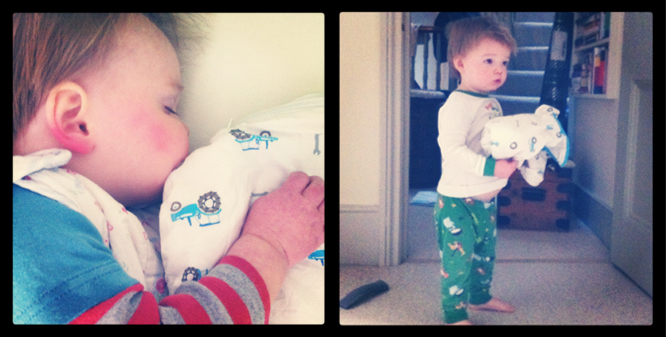 He has always been a good sleeper... just a bit of an early riser, and recently he's decided that this old gro-bag with tractors on is his 'significant object'. He just kind of gathered it up one day and started carrying it around. When you put him down to sleep, if he's tired, he will calmly put his head on one side while you do up the gro-bag, then he likes a cuddle and he'll put his head on your shoulder, often idly playing with some fabric, then when you lie him back down he bundles his tractor gro-bag and that seems to keep him nice and calm... (then you shut the door and he normally complains, but I'll ignore that bit)!
I'm trying to keep his daytime nap to the morning so that I get some free time while he sleeps and Coco is at pre-school, but I think he'd prefer to sleep after lunch. Not sure who is going to win that one yet.

And finally, he is a great kisser.
My brothers early kisses, when he was probably about the same age as Henry were called wipers - as in you had to wipe your mouth after you received one; this is very much the Henry style of kissing. He generally goes for the mouth, he doesn't believe in being offered a cheek but if you ask for a kiss you more often than not get one.
Posted by Alexis at 14:24