Despite the fact that art was always my favourite subject at school and that I went to art school I have never never been able to draw animals.
I've also been particularly bad at trying to draw animals.

I've had a think about this and I'm going to put it down to the fact that when I was about 12 we got a new art teacher at my school and her daughter also joined the school and was in my class. My new classmate was brilliant at drawing horses. She loved horses and drew them everywhere, I was very impressed (and obviously a bit threatend) by her skill so I just stopped trying to draw animals, it was like I drew a line there and decided to concerntrate on other things...

So fast forward a number of years (a-hem) and I find myself with a small child who can only say things like 'dog' or 'cat' and she demands that I draw them... I try to passify her with fish instead; which kind of works for a bit, and there's this little voice inside my head that is telling me I should try (as trying, I keep telling my children, is the most important thing) but somehow I never quite got around to really trying. And so I've given myself a little project to draw an animal every night (which you'll already know if you follow me on instagram). 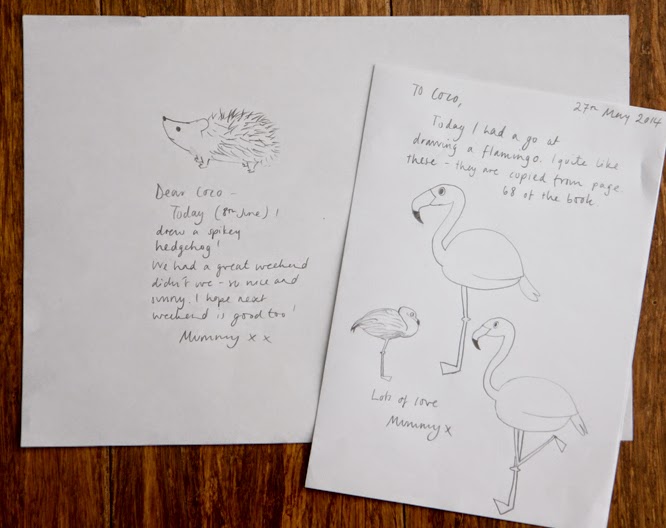 I've told Coco that this is what I'm doing so I feel a bit more of an incentive to actually follow through and do it (although I must confess I do keep forgetting) and I've started writing her a note. 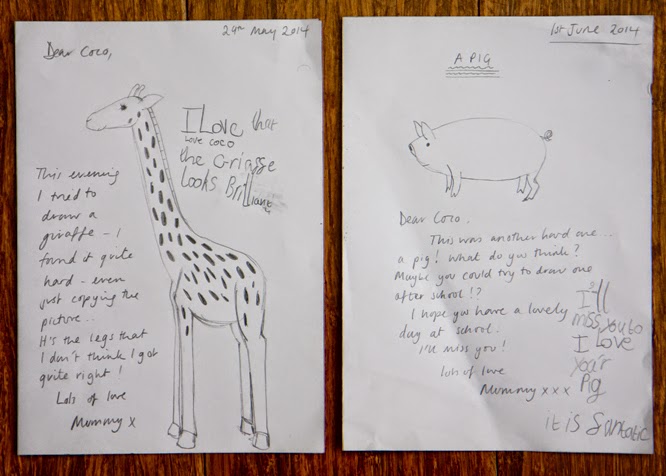 And she has started to leave little comments on my work... 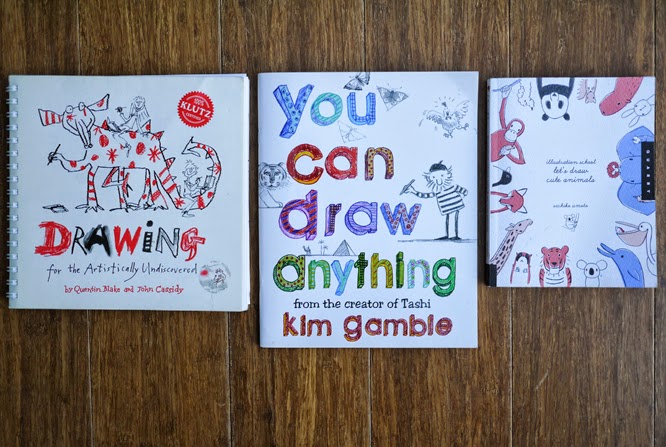 At the moment I'm literally just copying from this great book called 'Let's Draw Cute Animals' (on the far right of the pic) by a Japanese illustrator called Sachiko Umoto that we got a while ago from the Tate Bookshop (it's not available from their online store but you can get it online from Waterstones).
I've also, slightly unknowingly, started a small collection of how-to-draw style books which I'm going to start to refer to as well - bought for the kiddos really, but very useful to me now. I'm looking forward to adding an Ed Emberley's book to my stash as suggested by Lou from Little Green Shed.

I'm constantly wanting to learn more,* but learning sometimes feels like a bit commitment, it's nice to be doing something in a low-key manageable way. I just need to keep it up and practice everyday, then surely I'll get better? I certainly hope so... and depending on how I get on I might update you in a month or so!

*Since blogtacular I've been spending a lot of time looking at skillshare and fantasising about all the new skills I could acquire from map drawing to font making to being a whizz on lightroom. There is so much stuff to do.
Posted by Alexis at 12:03

Labels: Nice Stuff, Projects, something i made