Me, Kenzo and a Blind Love Affair

Projects take a long time around here. They are started, in a vague way, then are put aside, children are born, they are re-ignited again before being ignored once more. But eventually things do get done.
It just sometimes really does take years. 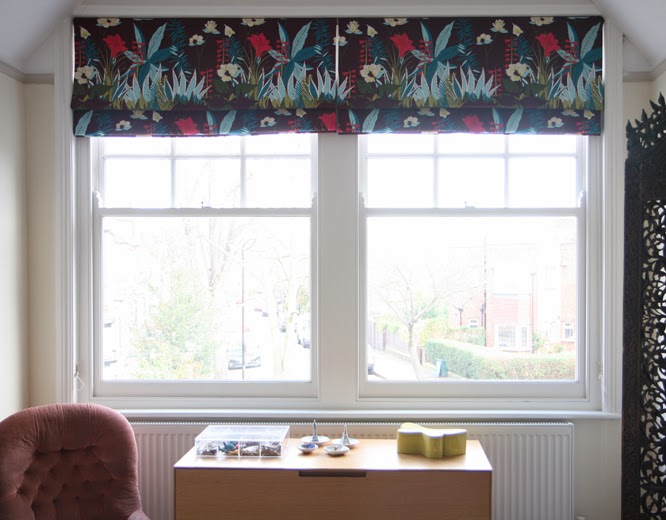 As an example, I'd like to share with you the time line of our bedroom blinds.
It starts about four years, way back in what feels like another life time...

Late 2009 - I used to work near Liberty and I'd often spend my lunch hour wistfully browsing the store. We'd just bought our house, it was a wreck, it kind of looked a bit like a squat. We were nowhere near the point at which it was appropriate to choose paint colours or blind/curtain fabrics; but I spotted some fabric by Kenzo in the furnishing department at Liberty... and I decided that was the fabric I'd love to have to make blinds for our bedroom.

Christmas time 2009 - I ordered a sample of the fabric - the one that arrived usefully had been cut to avoid ANY of the pattern. Yeah, thanks. 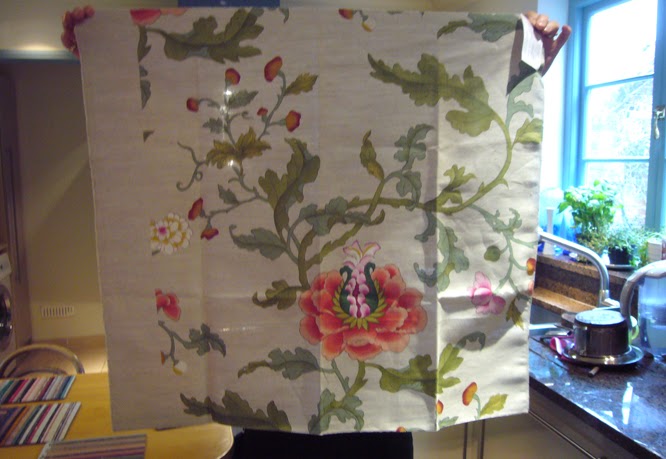 Feb 2010 - I managed to order a decent returnable sample of the fabric. I also got a couple of other samples - like the one above. I would still like to use that some day. It's by Manuel Canovas, but I still wanted the Kenzo for our bedroom.

March - April 2010 - The sample was lovingly carried around for a while... and I chose paint colours around it. I quite clearly remember asking one of the builders what he thought... I got a shrug and a sort of 'whatever floats your boat' look. 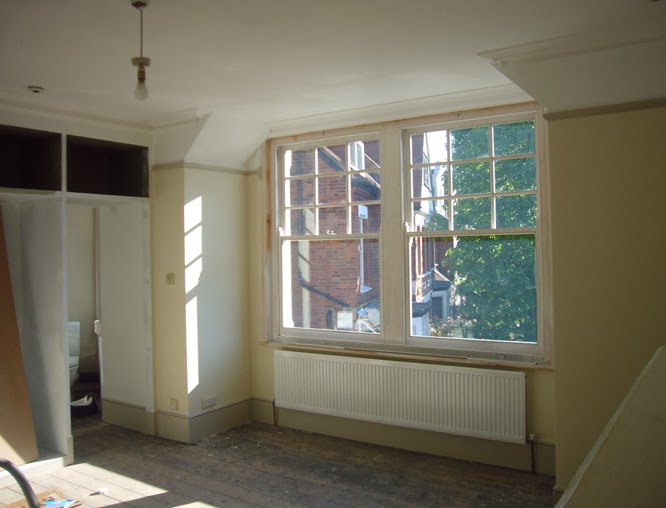 May 2010 - The sample was dutifully returned, the paint was ordered and used on the walls - it looks a little yellower than it really is here (It's Paint & Paper Library Sand IV on the walls and Paint & Paper Library Stone on the skirting and picture rail).
I did the calculations to work out how many meters of the fabric we'd need and suddenly felt a bit annoyed at the size of our bedroom windows (which I'd previously been very happy about).

Summer 2010 - I looked for alternatives. I did, honest. I nearly bought an Ikea fabric (it was called Patrica - no longer seems to be online) on a number of occasions but they never had it in stock when I visited - even when the website said they did. honest honest. at £5 a meters vs £70 a meter I would have got it.

September 2010 - Meanwhile in a 'money saving' exercise I'd joined up as a paying member of the Sewing Rooms in Putney to learn to make blinds and curtains. I mentioned it way back here. I sucessfully made a blind from some super cheap Designers Guild fabric that I got at a warehouse raid sale and then I went on to make Coco's lovely Spira Haga fabric blinds which I still love to this day even if the bloomin' Hampshire Hog pub on King street in Hammersmith decided to use the fabric as their backdrop. urgh. So I had the skills to make the blinds - surely that justified spending the money on the fabric as really I'd be saving £400 plus on the making!?

October 2010 - Then Liberty tempted me with one of their 20% off weekends and I did it. I ordered 5 metres of fabric, yep that's 5x70-20% £280 That was 1 metre short of the recomended length that I needed to make two blinds with the pattern match according the curtain company that I'd got a quote from. But I'd done a course, I knew better than the experienced blind maker. I could do it and save money.

14th October 2010 - I remember this one, as it was on my birthday. The fabric arrived... I opted to collect it... Pregnant with Henry, Hugh took me out for a day date on my birthday and we went for Afternoon Tea and then on to Liberty and collected the fabric, bringing it home on the bus with Coco in the buggy.
It was mine!

Nov 2010 - December 2011 (yep, that's a year) And there it sat throughout our long decorating and DIY hiatus (during which Henry was born). We kept it in the corner of the bedroom on a roll that I occasionally laid out on the bed to admire... 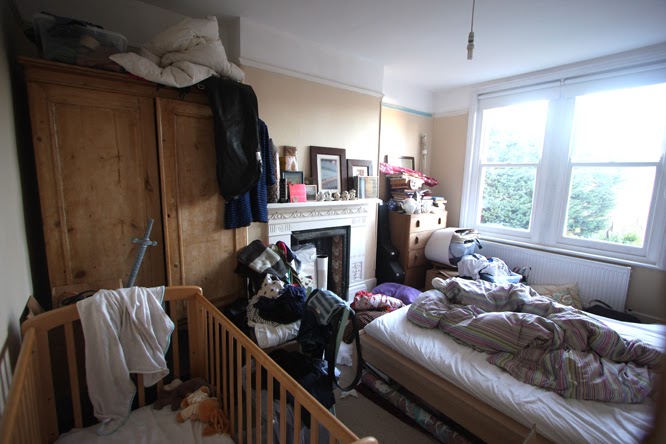 December 2011 - In our push to get some overhanging DIY tasks done before Christmas we had to move out of our bedroom while we striped the fireplace... This is how we lived for a week or so, you know, in a kind of chaotic pile. But the fabric was safe, see it there? Tucked under the edge of the bed? 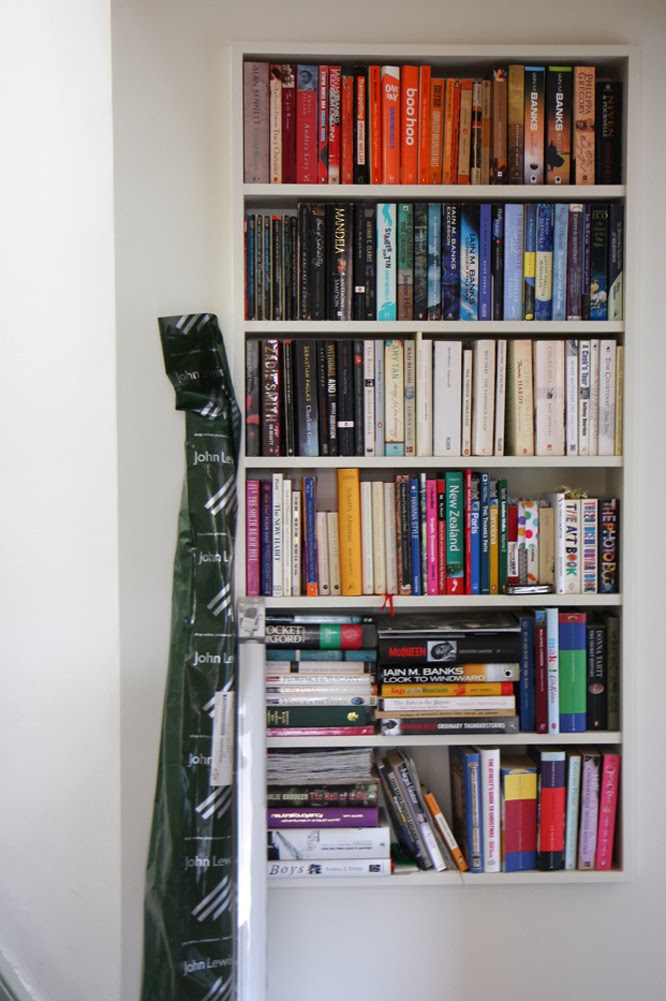 Jan-Feb 2012 - Lining fabric deliberations - I spent a lot of time deliberating about what lining to use. Should I do inter-lining and/or black out fabric? Oh decisions decisions. But sometime around here I bought some black out lining fabric from good ole John Lewis. This photo was taken in March, when the fabric had obviously been delivered... it sat there for a while, leaning against a shelf on our landing. I say 'a shelf' but really I should say 'Hugh's amazingly well crafted and beautifully painted sunken book shelf'.

And then another year somehow drifted past with no progress made, until... 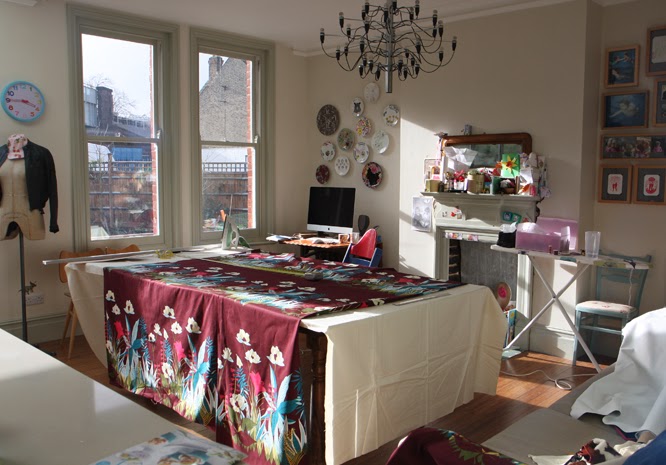 March 2013 - A weekend that I nick named the £1000 weekend. Because I aimed to make/save us £1000 over a weekend when my parents were looking after the children.
I was calculating:
Saving us £370 on making the blinds (as per a quote I'd got in a desperate moment)
Selling my Brompton (which we did for a stonking £600 - I did almost shed a tear when the woman who bought it cycled it away, but she was so pleased that it was kind of ok), selling my old computer for about £150 (tick) and various other baby stuff, some old curtains and a leather jacket (all still waiting to be listed on ebay...). It was a pretty good hit rate. But I didn't manage to finish the blinds. 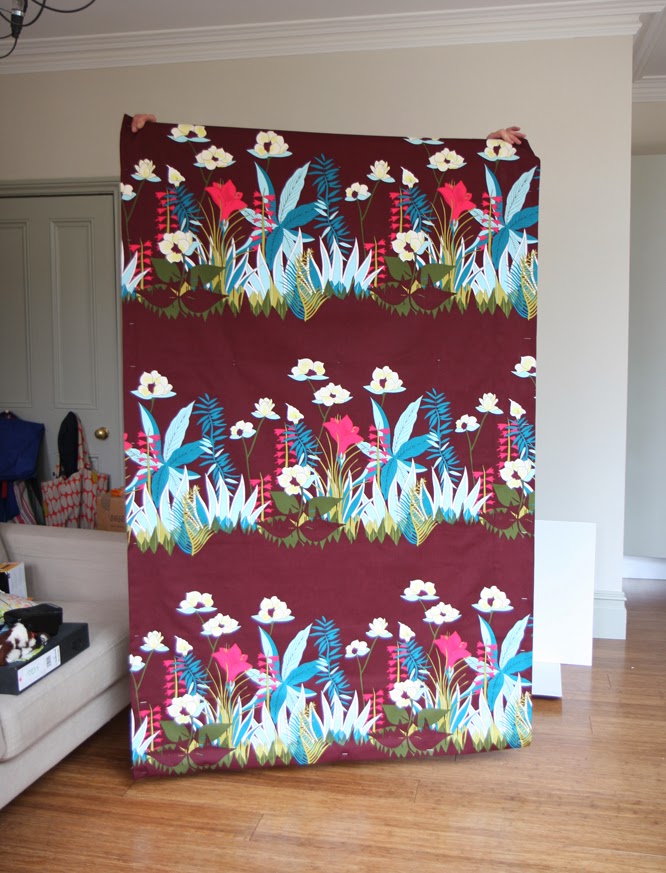 Much progress was made... just not quite ready to hang... 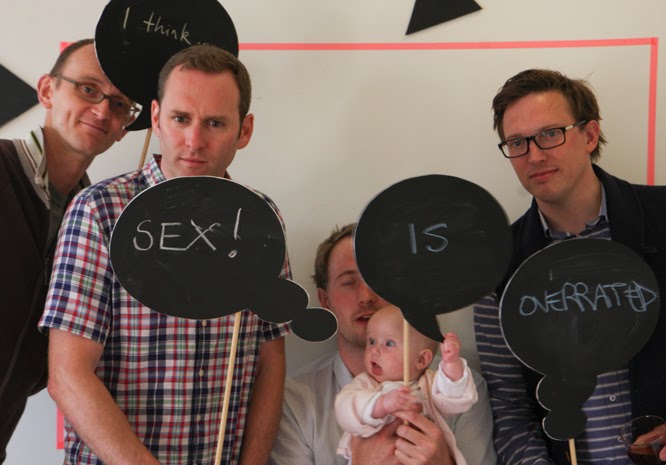 June 2013 - In order to finalise the shape of the pockets we needed the dowels. Hugh took Coco to B&Q.
Before the dowel found it's eventual home in the pockets of the blind lining I used them for the speech bubbles handles in Hugh's party photobooth.


Jul - Aug 2013 - Over the summer I had a few little hand sewing sessions...  Then I ran out of some supplies. You need lots of little rings and blind cord and velcro. Each time I went on to the John Lewis website one of the items I needed was out of stock. Thawted. 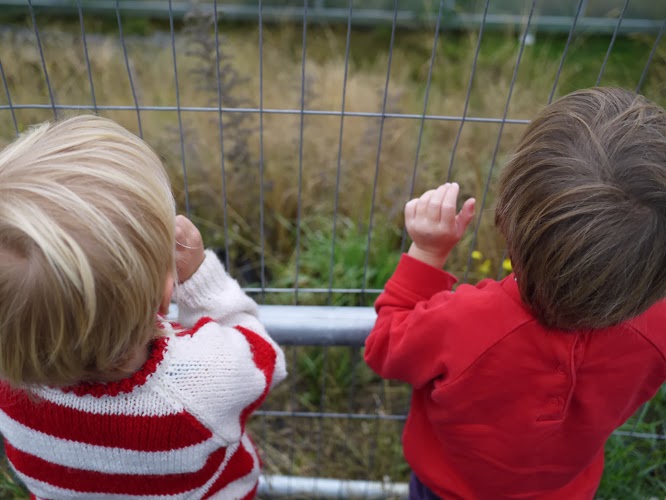 13th Sept 2013 - Henry and I had a date with Hattie and Johnny to go to the playground at the Olympic park. It was a very damp day but the boys bonded over building site/train/canal chat and we wandered and talked in the drizzle. On the way home I popped into Westfield and totally overbought on blind making supplies.

October 2013 - During the latest episodes of Downton Abby I sat and got pins and needles and... FINISHED SEWING THE BLINDS!

November 2013 - We hung the blinds. They were too long. A centimetre too long.

It took a while to make those final adjustments, but I did it, I managed to push through and finish a project. 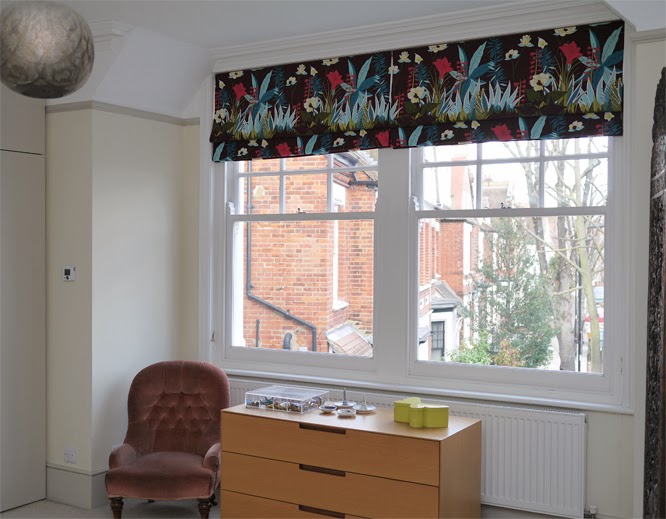 The blinds are finished.
They are hanging in our bedroom, and I love them.
Everyday I love them. 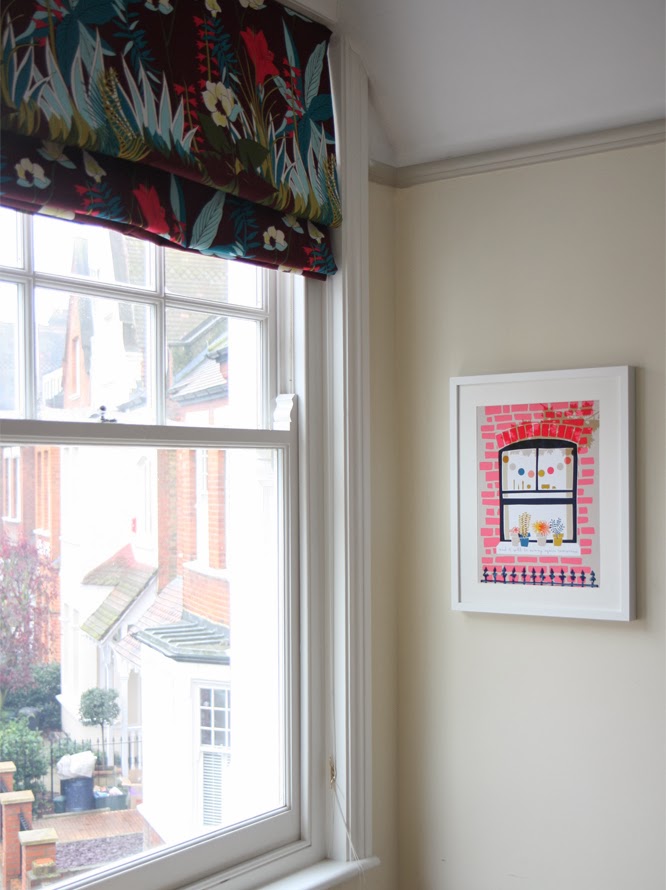 And now they also have this lovely print by Francesca of Mrs Eliot Books hanging up to compliment them too.
Posted by Alexis at 12:13

Labels: My Home and Interiors Inspiration, Projects, something i made