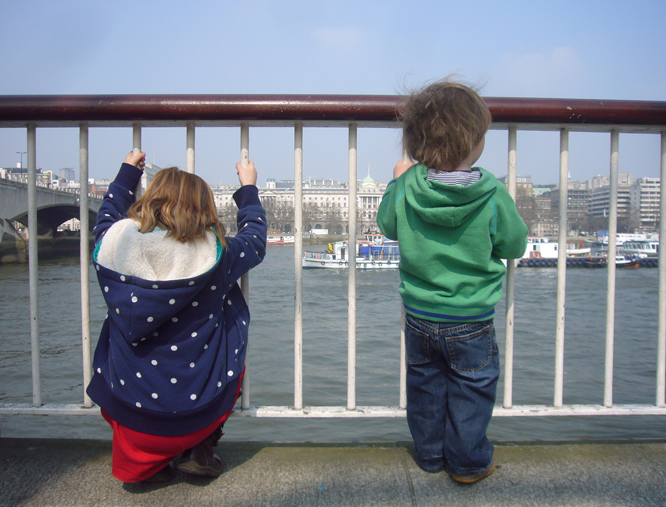 Is it true in life that the really good days are often the spontaneous, unplanned ones? Certainly the best day of the Easter holidays took me a little by surprise.

I'd arranged to take Henry and Coco to my Mum and Dads to stay the night, but the end of the holidays were looming and I had really really wanted to fit in a visit to the Light Show at the Hayward Gallery too...

It occurred to me at some point between sleep and waking that I could  take them on the way to my parents house, ie, go into central London and then out again on the train, rather than driving as I normally do.

Coco woke up complaining of a sore throat, so the plan was nearly shelved, but post breakfast she was bounding around as normal, so a speedy decision was made to just do it. I ready in record time packing the most efficient little rucksack of clothes for them - remembering teddy and gwaint (Henry's name for the old grobag that has become his significant object). I do pride myself of thrifty packing although I could have been even more efficient as it turns out Coco managed to wear the same thing for the entire time she was with my parents and her spare clothes came back clean. 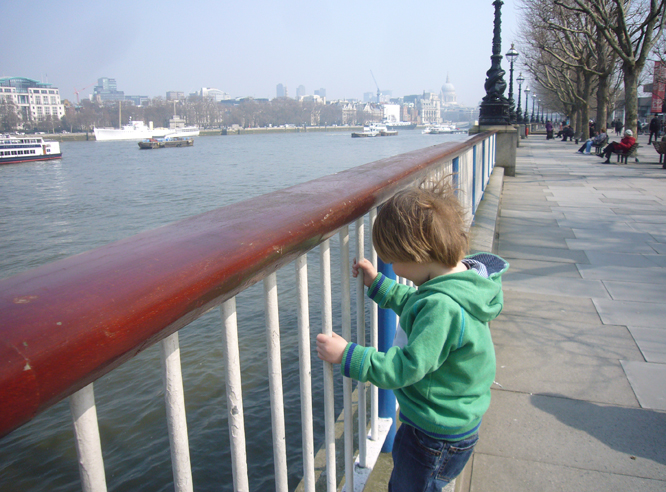 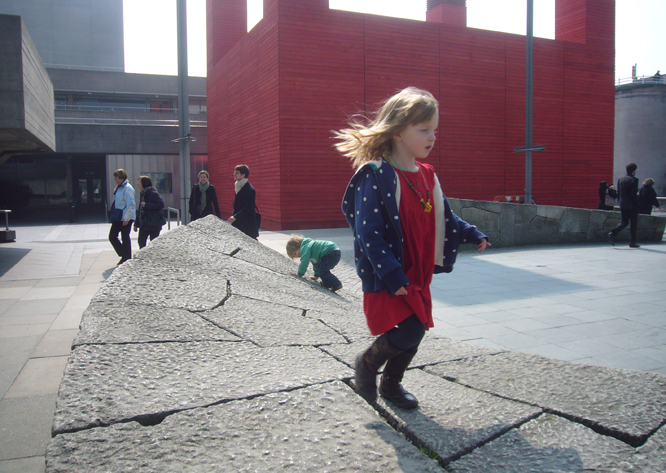 We tubed it along to Waterloo - bloomin' Westminster station lifts are out and Coco has recently developed a very un-London like fear of escalators, so that was a bit hairy, but I think we did enough escalators to calm her fears.
At Waterloo we had a quick detour to our friends house to deliver a present for her teeny-tiny newborn baby - and have a very brief slightly chaos-causing visit.
Then we got down to the river and the sun came out.

Due to the lateness of decision making and departures I decided we should really have lunch before the exhibition so we boarded a plane and went to Mexico. Well, we pretended to board a plane and we went to Wahacca.

It's great going to places that are staffed by young and most likely child-free people sometimes as in some cases they have much more patience with your kids than you do.
Henry demolished a cheese and mushroom quesadilla (although he very carefully removed all of the sweetcorn, which is strange as he loves corn on the cob). Coco who is working on an attempt for the Guinness Book of World Records to be the s-l-o-w-e-s-t eater didn't even start on her main course until I'd ordered pudding and it was sitting on the table, but I didn't care too much as I was enjoying my food and the view and the fact that I wasn't the one that was going to have to clear up all the mess they were making. 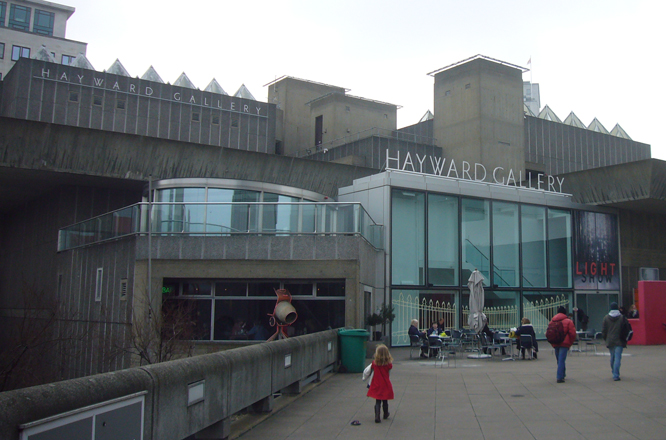 And so to the actual exhibition.
As soon as we walked in they were captivated, we managed to look at everything and although I probably did have to say 'don't touch' to Henry about 1000 times they were surprisingly well behaved, mainly as they were just enjoying themselves. For once I didn't actually break into a sweat while visiting a gallery with children in tow.
There are lots of rooms to explore which meant there was a whole voyage of discovery about the show and their reactions to the artworks were beautiful and insightful at times.
Henry and I had a second visit to the exhibition on Wednesday with Culture Baby and one of the revelations in my second visit was that Jim Campbell's piece, a beautiful seemingly random collection of suspended little dot lights actually contained an animation of people. This was interesting to me as on my first visit Coco had informed me that her favourite piece was this one - and she referred to it as "the one with dotty people" - I hadn't even spotted the people. 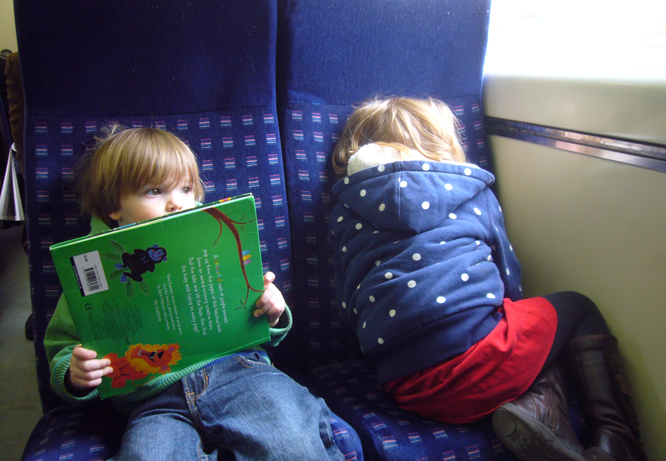 After the gallery we made our way up to Kings Cross to catch our train. They were zonked, but still managed to keep it together. Coco fell asleep and Henry kept turning and stroking her top saying 'it's alright Coco'. Too cute. 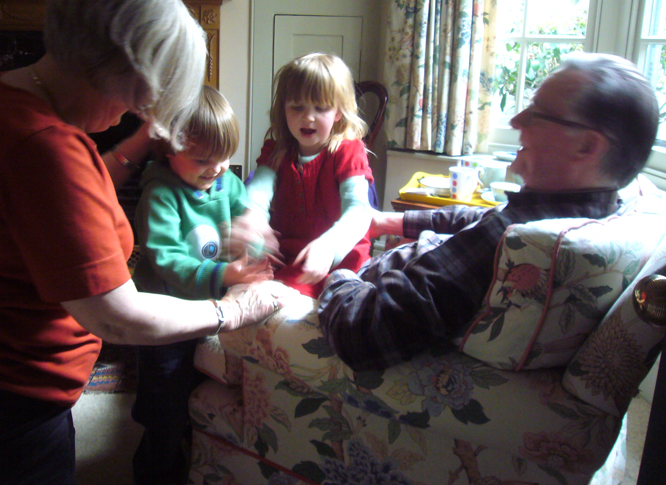 My Dad was there to meet us at the station and with the excitement of seeing him and cake on arrival Coco soon perked up again.

After a reviving cup of tea I caught the next train back to London feeling all loved-up about my family, I would have sat on my phone instagramming the whole day, except lucky for instagram my phone was dead. I headed straight to Soho where I met Hugh after work and we went and had a very civilised dinner at Arbutus (which gets top marks from me) before heading home to bed... and a lie in the next morning.

Yep, days like that don't come around that often. It was a good one.


A side note on camera's...
All the photos above were taken on my pocketable Panasonic Lumix camera which we are currently looking to upgrade.
When I'm out with both children, buggy, scooters etc etc I rarely want to take along my DSLR but I do want a really decent alternative... anyone out there got a good compact camera that they love, is reliable, takes good low light shots and is fast to shoot? I'm quite taken with the Fujifilm x20 and the man in John Lewis (who has got to be trusted, right?) has suggested the Sony DSC RX100. So it's looking like one of these at the moment... Opinions are very welcome, thank you!
Posted by Alexis at 12:08