Our house... from the beginning

This is a little look at our house before we started renovating it.

For more up-to-date house posts of finished rooms or work in progress you can look at:
The Kitchen (in progress) The Kitchen (with a few finishing touches)
I also blog about my messy kitchen mantelpiece every now and again...
Coco's Room
The Sitting Room (in progress) and The sitting Room (nearly finished)
The Bathroom

We first saw our house on the 4th May 2009 - 3 years later it seems that we did manage to get it at the bottom of the market. We were/are SO lucky... (although sometimes amidst the dust and the grime and never-ending lists of DIY tasks, it's hard to remember that)! It had been in the same family for sixty plus years and although it was in pretty good shape and had been taken care of, it had no central heating and the garden was so over-grown that we couldn't even really tell how big it was. In fact some of the ivy from the garden had started to get in through the windows. There were 3 semi-kitchens, but not one definitive one, and only one small bathroom which didn't have a toilet in (there were two toilets, just not one in the bathroom).
BUT...
There was/is a lot of space - more than double the square foot of most of the places we had been looking at and it was cheaper - partly due to the market and partly due to the fact that it backs on to the tube line and it needed so much work. 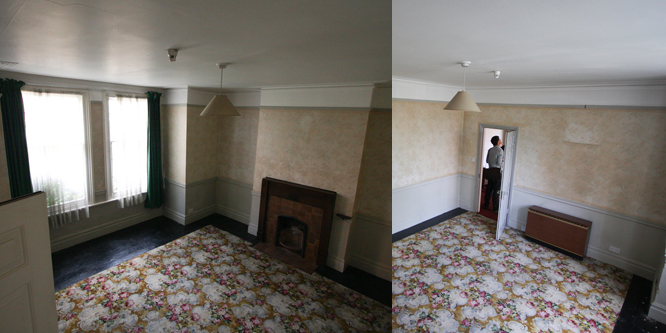 The sitting room - unfortunately one of the only rooms missing it's original fireplace. 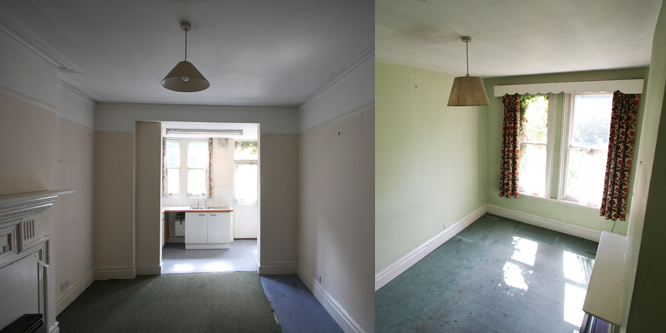 On the left is one of the three 'semi' kitchens and on the right the dining room - these are the two rooms that we knocked together to make one big kitchen. The 'master bedroom, on the left when we viewed it and on the right at some point during works - the plaster had to come down to fit the new windows which now match the original window style from next door. Coco's room - you can see the ivy trying to get in at the windows!

Anyway - we were blown away by the space and the potential and we arranged a second viewing pretty much straight away and put an offer in within 48 hours! In two months the 'monster' as it got nick-named was ours.

Camping!
We moved in without doing anything (except a bit of cleaning) for four months from Aug 09-Nov 09. We got a feel for the place and started planning. The pictures of us in this phase are mainly of Coco with a bit of house in the background... Dan who ended up project managing the building work for us took a load of photos in November - this shows the way we were living, it looks quite squat like! We moved in with the minimum of stuff so we had nowhere to put anything. It wasn't as bad as it looks, just very very cold - but funnily enough I think I slept the best I ever had in a cold cold house. This is now our bathroom - but when we moved in it was just another 'semi' kitchen. It's on the first floor and the bums are inspecting the garden works that were afoot on the weekend we moved in. We used this room as a kitchen/living space for about a month and for the first few weeks we were cooking on a primus camping stove. We upgraded to a double camping stove when we moved downstairs when work started on this room. More kitchen! This is what we call either the playroom or the garage room - it's actually in a much worse state than this now! We've taken out most of the kitchen and the walls separating it from the loo and the door to the garden at the back. This loo was our only toilet for a couple of months and it was so chilly! This room is another project for another day - at the moment it's filled with tools and wood and all the left-overs of the renovations so far. When we started works upstairs we moved our 'living' space downstairs. These are some of Dan's pictures showing what a tip we were living in! I'm sure it wasn't always this bad...!?

There was one point when my sister said something about Coco's room being so bare and drab that other people might be tempted to call social services. Hopefully we've made it up to her now!