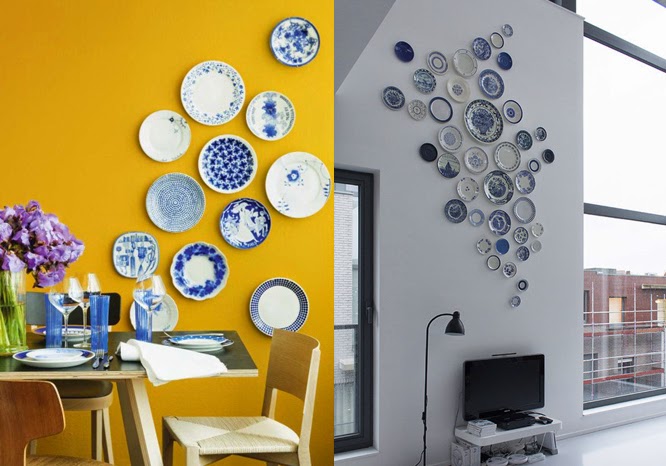 I very clearly remember the day about 15 years ago that I went around to a friends for supper and after a couple of glasses of wine (I'm sure) ended up teasing her about how grown up she was now she had a plate on the wall. Fast forward a few of years and suddenly having plates on the wall became something that I was doing... I'm quite a magpie when it comes to china and there are so many lovely designs out there that being able to have a gradually expanding collection of plates hung on the wall was actually very pleasing... (and of course I was a bit more grown up myself by then).

However due to the recent delivery of (drum roll...) ... our new sofa* I'm now having a bit of a re-think about my plate wall. 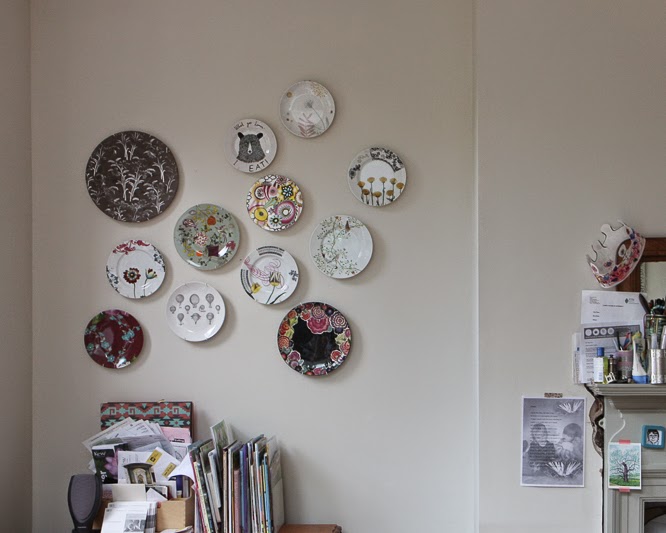 Up to about two weeks ago - this was what our plate wall was like.

So now the plates are just piled up - waiting for the day that we might have the energy to put up again. 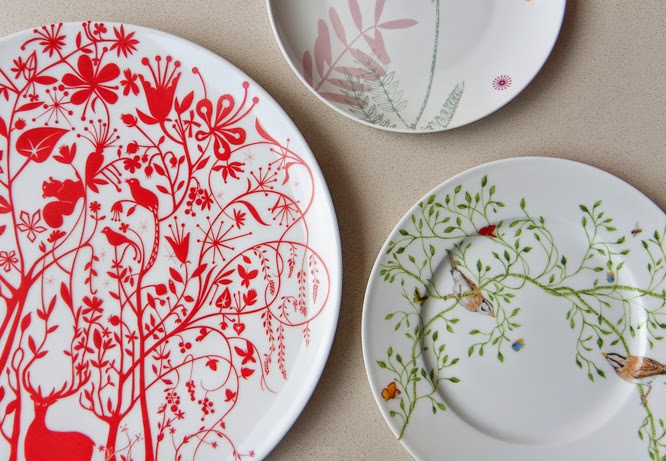 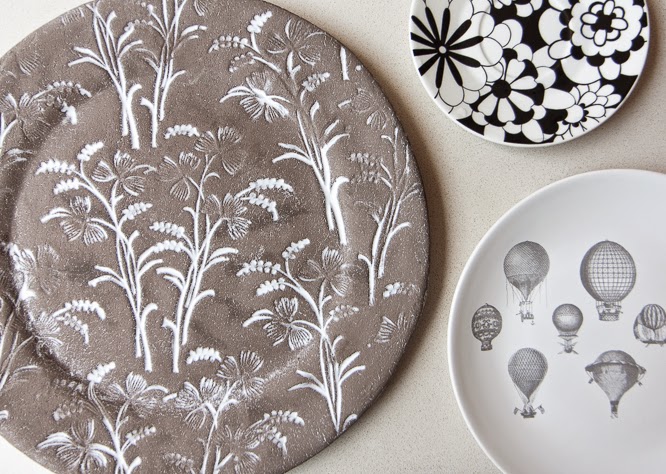 In fact there are some plates that have never even made on the wall - like the Tord Boontje plate (the red and white patterned one) that was a 30th birthday present (nearly 10 years ago... ahhhhh) and the Missoni saucer (the black and white one above) which lost it's cup in an unfortunate accident.

The longer the plates sit there the more I'm wondering if we really want to put them up again? I don't know if I'm feeling a bit over plate walls? Or is it that our collection of plates is just a little too eclectic?

I'm thinking we have four options:
1. Put the plates away and use them as plates - radical I know.
2. Put them back up in the kitchen over the new sofa. 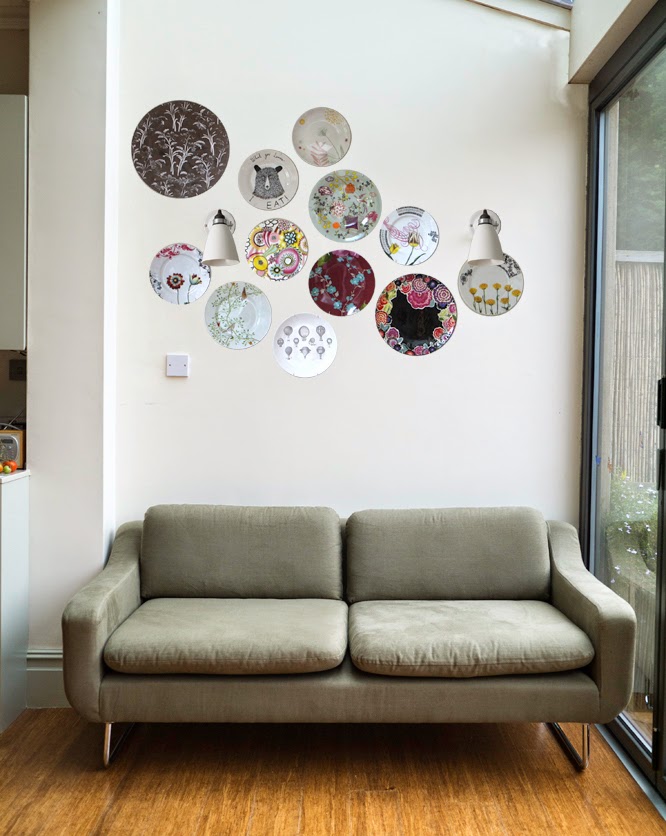 I had a go at mocking up what they could look like... Apologies for my very rough photo-montage, but you get the idea right? Oh and you get to see the new sofa.
I also added in the lights we'd originally intended to get here but have yet to buy (they are the Hector wall lights by Original BTC).

3. Or we could put them up in our downstairs loo? I like a bit of pattern clash... but would it be extra-odd to have plates up in a loo? Also the room is tiny and there are quite a lot of plates, plus I LOVE this Svensk Tenn wallpaper and wouldn't want to cover too much of it up.


4. The other option would be putting them up in the sitting room. 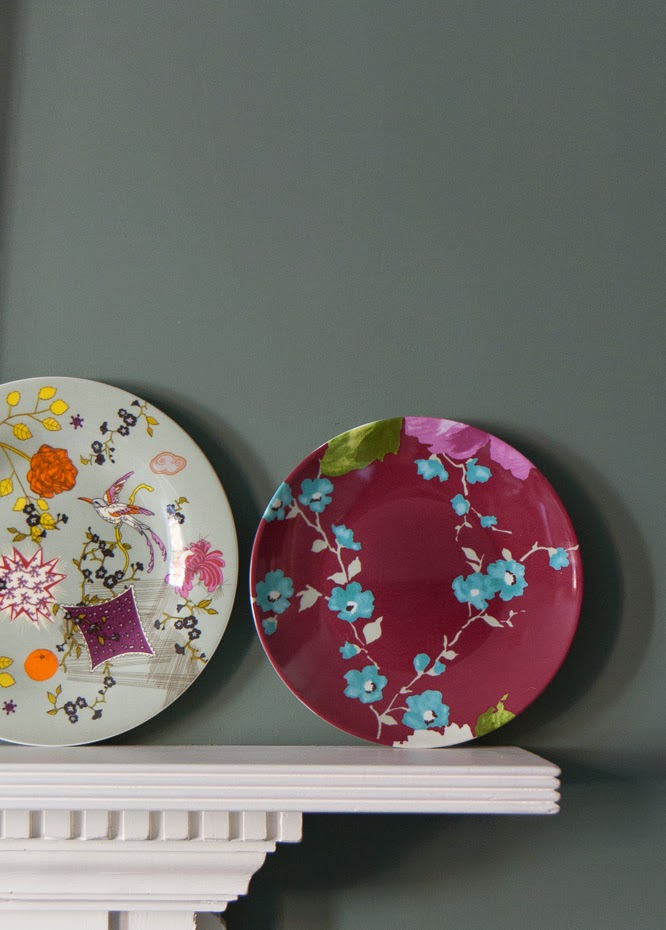 I think this would look quite good as the dark walls are a great compliment to pattern (the conclusion I reached after some extensive Pinterest research...) but again, plates in a sitting room, bit odd? Or not?

I do love this little collection of plates that we've gathered over the years... but... Oh! I'm so bad at making decisions!

*Just in case you want the sofa details....
This sofa was a long time coming. I've been looking out for a sofa that would fit in this space for ages. It's 185cm which in sofa terms seems to be a bit of a non-length. They either come as three-seaters which are normally around two metres or as two seaters which are around 165 cm. Anyway - we eventually found this one in Aria in Islington (it's called the Aspen) and it's the perfect fit for the space and gives us a lovely view of the garden... now I'm on the look out for a rug. Got to have a reason to trawl interiors websites, shops & markets - having a purpose in life is very important (you get my sarcasm here right)?