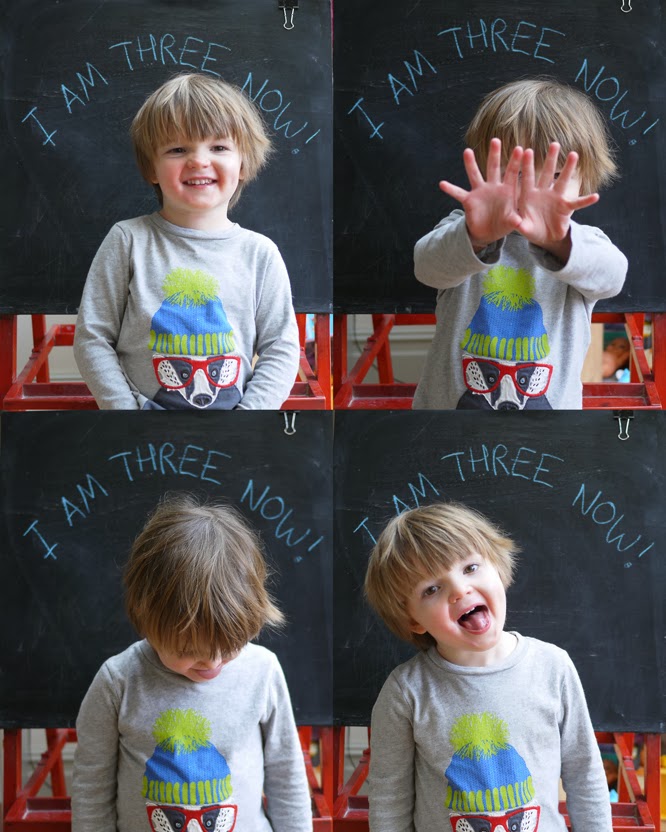 This boy - for he is now no longer a baby, or even a toddler - is THREE.

He had a very happy birthday. I felt a bit mean not having a 'party party' but as it happened having lunch at the pub with 11 doting adults was perfect and his very basic last minute presents from us; a pack of balloons with a pump and some wooden biscuits, were also totally fine with him - which is afterall the most important thing.
(Can you tell I'm feeling a bit bad about this?)

A few things I'd like to remember about Henry at three...

He loves cooking... as soon as I open the fridge I hear the sound of a chair being pushed across the floor so he can stand up and help. He is pretty proficient at chopping and uses an old steak knife to do it, he'll also crack eggs and is very determind about stirring pans on the stove. I'm fully aware of quite how dangerous that sounds.

If I want a bit of peace and quiet (but am willing to put up with the consequences) then allowing Henry to 'wash up' is probably my best option. He'll often ask for coloured water too. That is his favourite. The brio train set is out constantly, the trains are often very very long and Henry finds it very stressful if/when they get derailed.

'Alarmas', repetitive noises are always commented on as being alarmas, and those red strings in public toilets and the lift buttons with the bell on. If he sees one you are sure to be told that that is the 'alarma'. Although now I've corrected him so many times that he probably does actually say alarm 50% of the time.

During his first couple of weeks at nursery almost everyday there would be someone who would say to me "ah, so that's Henry, I've been hearing a lot about Henry" yep, this three year old has a reputation it seems. I'm not sure if that is a good thing or not...
He's getting really good at dancing - and occasionally requests music so he can dance and tidy (they are in training)! Him and Coco have special dancing hats (bowler hats from the dressing up) and the post dinner disco is a daily highlight... (or it certainly should be, I must say by 6.30pm my patience for life if often wearing thin).

We've also got to the black is white phase. Example;
Me "Henry don't touch the teapot it's hot"
Henry "No it's not hot, it's cold"
Me "No Henry, it's hot"
Henry "OWWWWOHHHWWW"
Me "I told you"
This happens with everything. I tell him one thing and he will tell me the complete opposite in a very matter of fact way. His language is peppered with 'extremely' and 'actually' especially when he is trying to stand up to Coco's bossy ways. The other day Coco asked him to look after Teddy while she went to the loo and he very gently picked teddy up, stroked her and covered her with his gwaint (security blanket) and said "it's alright Teddy, it's alright".
My heart melted a little.

And of course I'll take any excuse to dig out my baby photos series of Henry.
I'm so happy we decided to do this…  here is Henry from three months (ahhh, feels like yesterday!) 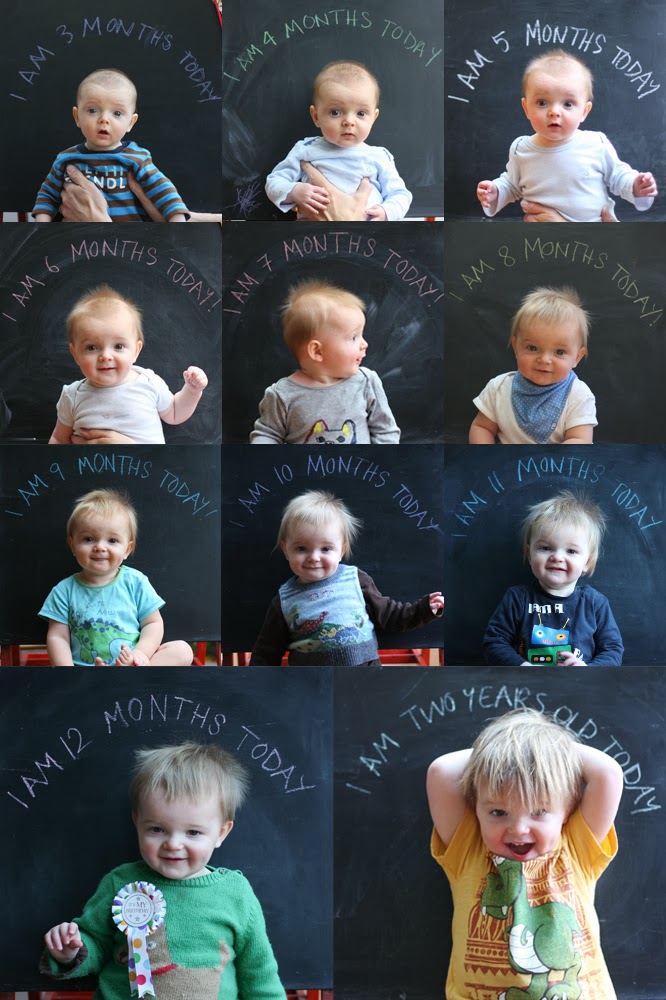 Henry, you make us laugh, you exasperate us with your ways and you're often just too LOUD, but we love you so.
Posted by Alexis at 10:15