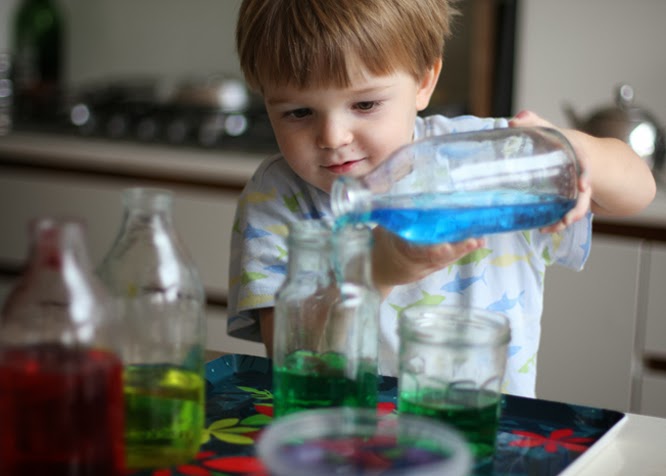 I'm sitting writing this and all I can hear is giggling.
Henry is upstairs with my sister and they are playing a game.* We have got to that wonderful point where Henry invents games... along with quite a few other milestones that, as normal have all crept up on us. Suddenly I find myself as a mother to a boy who no longer wears nappies, not in the day or at night. We are a nappy free family after six years, the baby stage has well and truly slipped away (how I feel about that must be saved for another day... it's complicated to say the least). No bottles or formula, even our sippy cups are lidless nowadays and we hardly need a buggy - not that I can quite bring myself to sell it... and no longer do I have an hour and a half to myself everyday with a sleeping baby upstairs, naps went when Henry started nursery in September. 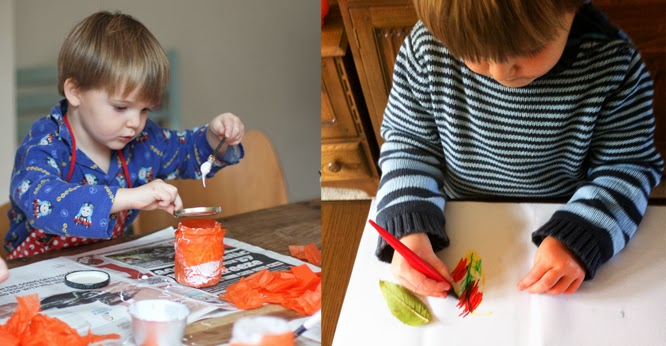 Joining in with arts and crafts... 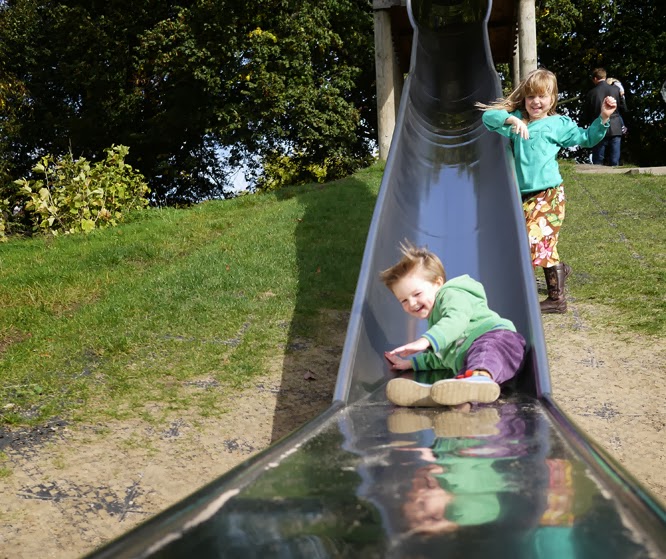 Lots of changes... but changes that come with having a happy, normal little boy, so changes that are good. I say it at every age I'm sure, but I'll say it again: I love this age. Henry is my little companion. 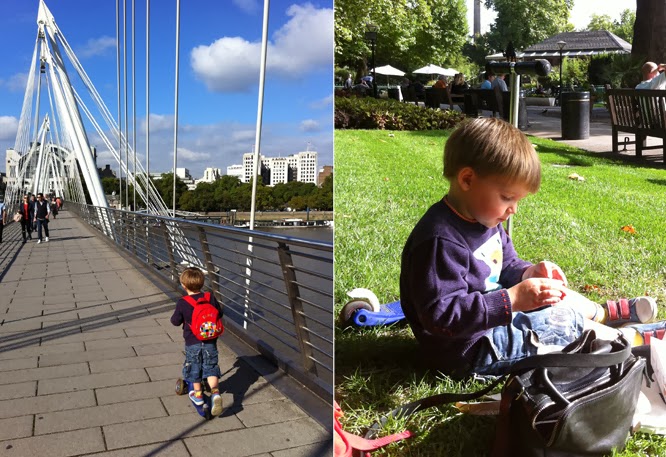 The last day he spent in shorts back in October... "It's lovely in the sunshine Mummy" he said while we had our impromptu Pret picnic in Victoria Embankment Gardens. 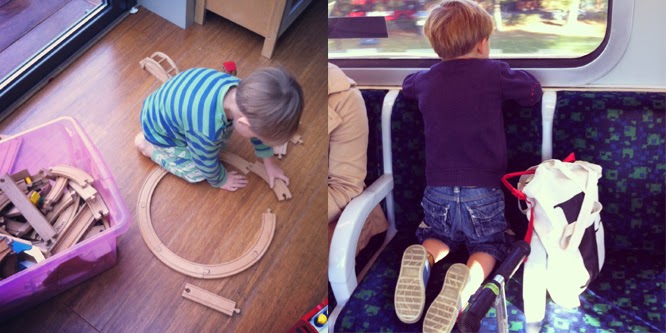 We go on the overground train just for the hell of it. The other day we took two trains to get to Westfield in White City instead of just going 10 minutes on the bike. He loves the overground, I get a constant commentary of what he can see - and luckily a journey from South Acton to Shepherds Bush via Wilsden Junction delivers: cranes - canal - lots of train tracks - bridges - tunnels - parks - big roads etc etc. Much more fun than the tube... although he'll take a tube journey as second best. He does keep requesting that we go on either a service train (we saw a big maintenance train which made an impression a while ago) or a steam train - the subject of our favourite train books - The Little Red Train and Noisy Train (I'm afraid I get rather bored by Thomas so haven't really gone done that road track). 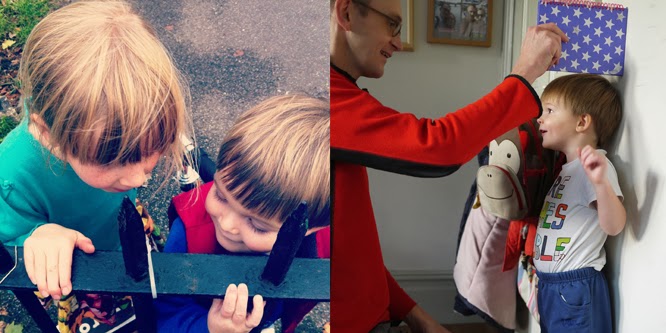 He is already only an inch shorter than Coco was at four (and all his trousers are grazing his ankles).

At nursery they keep telling me that he has been really chatty. They are starting to see the real Henry that you only get to see once he has overcome his fake shyness... He, like Coco, is cautious with people he doesn't know, he clings to my leg in new situations and is even coy with people he hasn't seen in a while. With nursery I think it took him about three or four weeks to really work it all out. He was very happy and busy, just not particularly involved, preferring to play by himself but now he is of-fay with everything I think the staff have been rather taken aback by his chattiness.

Hearing his language develop is amazing, after watching some trees being trimmed the other day he then gave a very comprehensive description of the process to his Grandma in Edinburgh, even explaining that the man had cut his hand (before) and there had been lots of blood, and about how the branches were put through the chipper on the back of a truck.
If I have the radio on he'll pick out words and ask what they are talking about. Today he heard the word 'balance', "Why did the man say balance Mummy?" and the other day he heard someone say Henry on the radio "They said Henry. What Henry"? he asked slightly indignantly. 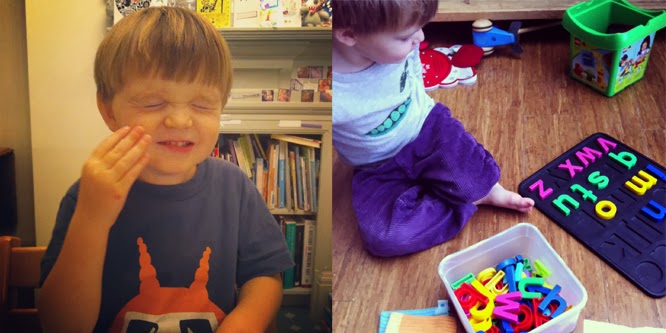 Trying to shut his eyes - it takes a lot of concentration... and learning letters. Whenever he see's an H he shouts "It's an H for meeee!!"

He is constantly busy in that way that little people are; building duplo pizza's or houses, train tracks, taking the boat to France; he requests that we do this a lot - our overnight ferry ride to France was his summer highlight, but is also quite bidable and will often play with the toys you suggest. I've been instigating a 'do your jobs' routine when we come in the house and Henry now puts his shoes, little Elmer rucksack and coat away on auto-pilot (Coco is proving a bit more tricky in tidiness training... she's got away with being a mess for much longer than Henry I suppose). 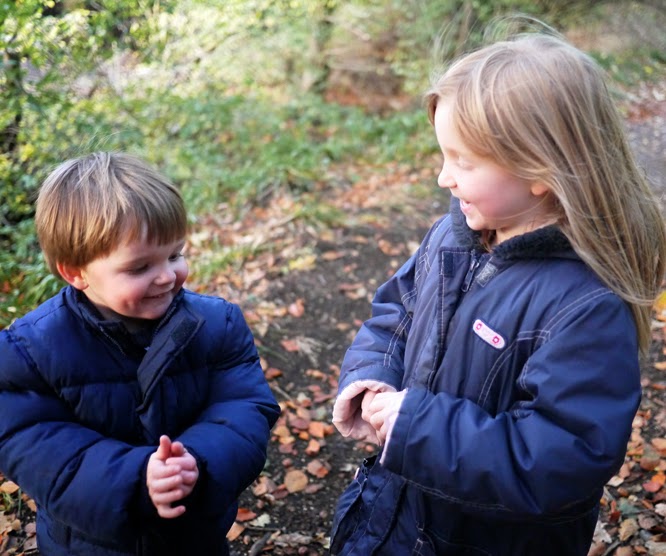 There are moments when he is just like Coco's little shadow. He loves being involved in her games, packing up bags and going off on imaginary trips to the park or shops, or doing her strange versions of 'music and movement' classes, on Tuesday they were being fireworks, naturally.

He has also become her messenger. This morning our bedroom door flew open and Henry came in telling us "It's 7.30. Can we go downstairs now?" That's the first time she has delegated that task to him, normally she gets him to request more TV...

*something involving wrapping Henry in the duvet and making him into a sausage roll I've since found out
Posted by Alexis at 17:47