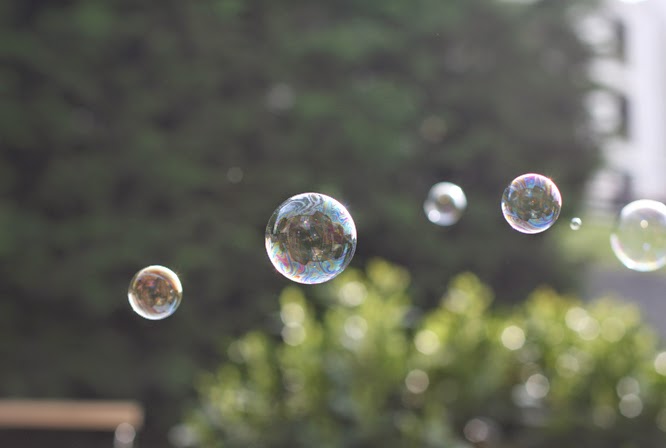 Our camera is just back from being fixed, in time for capturing summer fun... simple summer fun. For the price of a bottle of bubble mixture I get happy children for at least, um, 15 minutes? 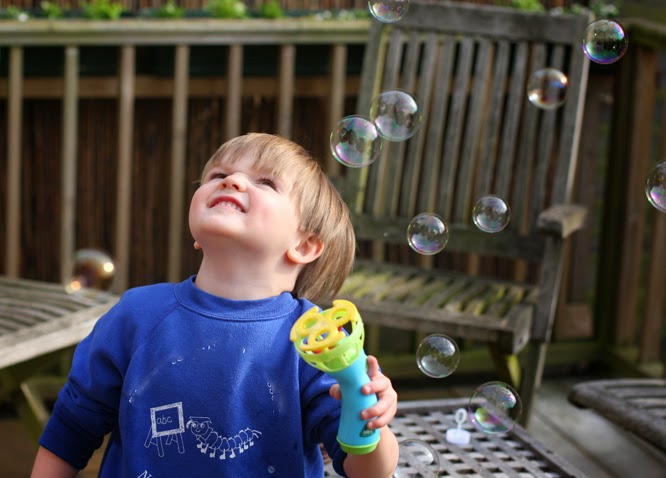 Henry in charge of the bubble making contraption that my Mum got in one of her charity shop hauls - she volunteers at her local charity shop so we often get bits and bobs - it's great for all those school fancy dress demands. Although she told me the other day that once in a while the shop has to have a clear out and the things that really don't sell that well are the plastic toys, so they put them in a skip. Another reason not to buy plastic toys I say!
Mum came to the rescue though and now she takes all the things home and puts them on freecycle... [How right-on am I making you sound Mum!?] 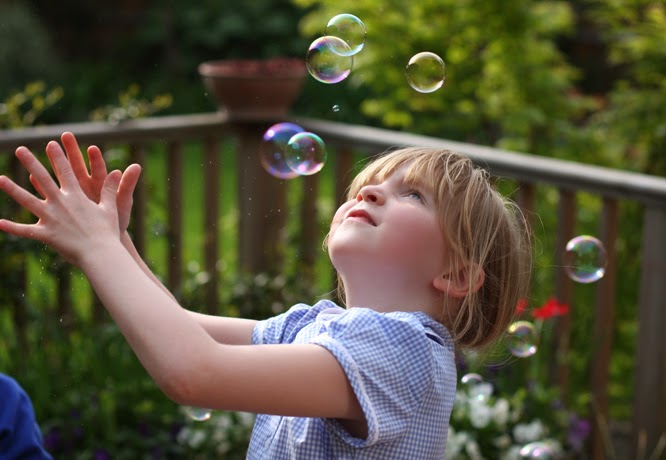 My six year old - still so innocent (for now). I love the conversations I can have with her, particularly on the cycle home from school where I hear about snippets of her day. Last night we had a little Q&A - she doesn't like to be asked too many questions so Hugh and I were allowed to take turns asking one each and in between she would tell us something she wanted to say... it was one of those spontaneous moments that I would love to be able to repeat over and over. 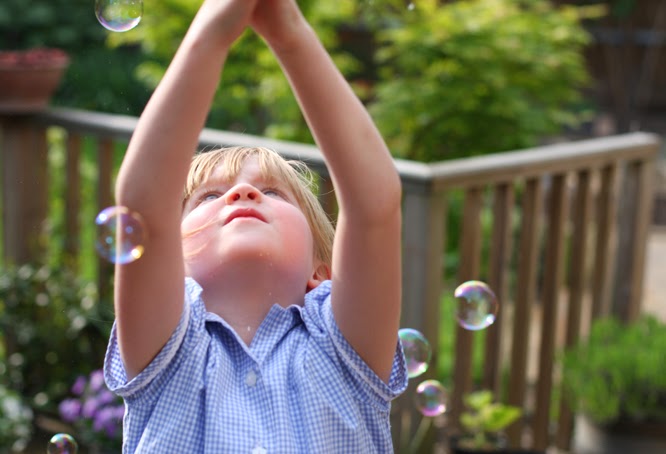 We've also started to have 'the news' occassionally when we are having supper all together. We each report one thing from our day and then pass over to the next reporter. Considering neither of my children have ever (to my knowledge) watched the news I'm quite impressed by how well they've picked up the concept "but you have to say where you are reporting from Mummy."
Maybe all that Radio 4 which is so often on in the background has been picked up on afterall... 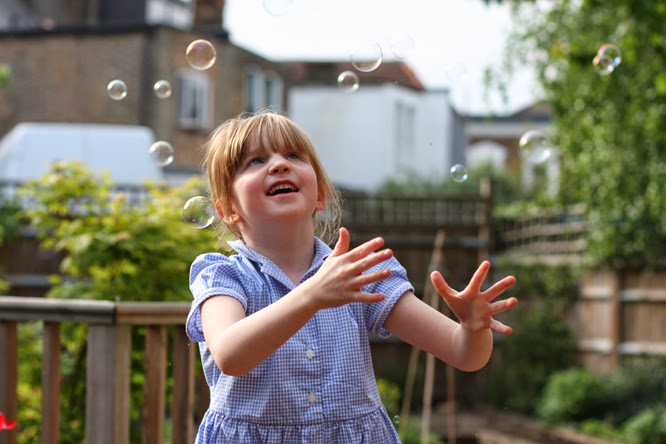 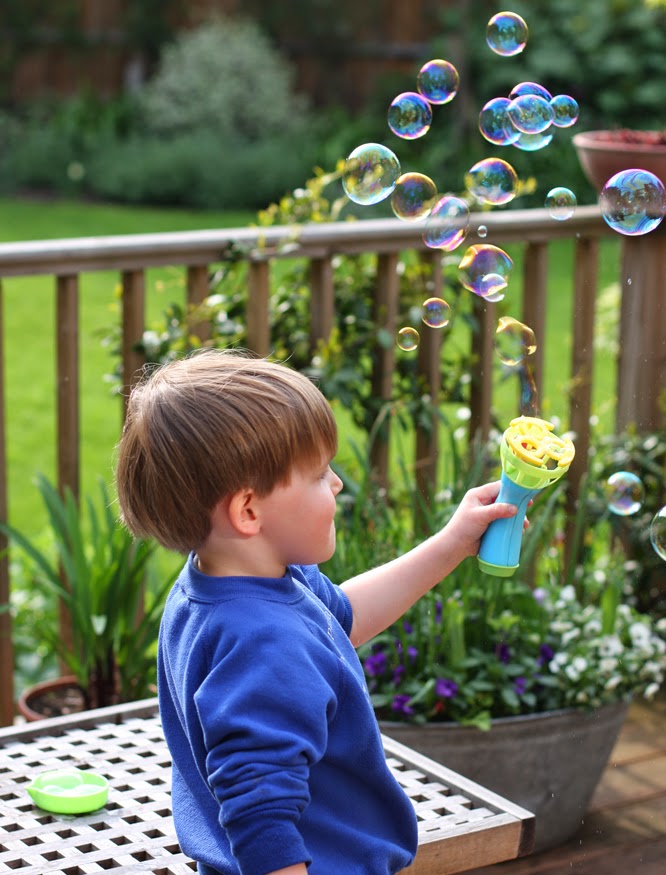 Henry is becoming much more of a chatterbox. We are in the why stage and sometimes if I don't know the why he thinks that maybe just shouting at me "but Mama I'm asking you WHY" might magically make me know the answer. His obsession with water, pouring and pipes, hoses, funnels continues. The outdoor tap (when in service, we often have to take the top off it) is his favourite place to hang out. 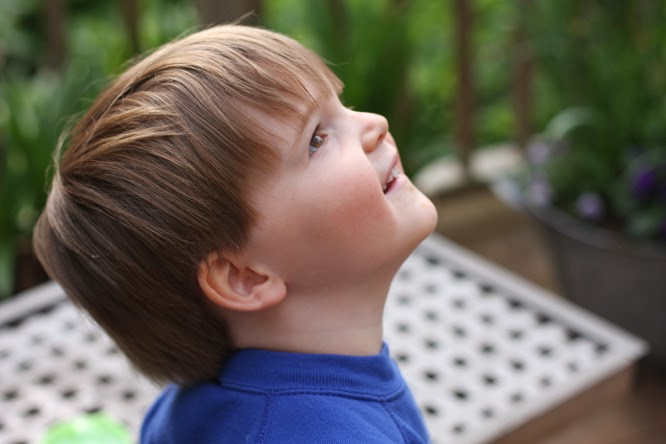 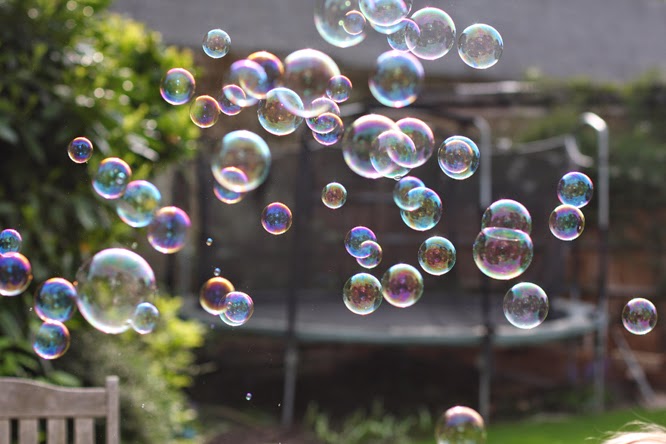 And me? Well I've been frozen with indecision here on the blog recently.
I want to change it a bit, move it forward and I have lots of ideas... but then I just end up putting up some images of bubbles, and I wonder if change isn't such a good thing... I'm just not sure where I'm going with this space.

Going to Blogtacular was like adding fuel to the fire. So much inspiration - listening to some amazing speakers (Anne Ditmeyer particularly really got me thinking) and best of all the opportunity to meet so many blogger friends old & new.*

Then the very next day I went to Kidcrafters - which was also at the Royal Institution and had my brain filled with questions and ideas by another bunch of people with fantastic ideas about how to help our small people navigate the world and become happy big people...

My head was near to exploding with so many ideas buzzing around it by the end of the weekend that I haven't really been able to properly process it all yet. It's now stuck in the sand a bit. Time to pull it out!

*Lucy, Hannah & Davina, Heather, Bryony, Kelly, Lori, Laura, Lottie, Emily, Alyssa, Bryony from Rusty Rambles, Beatrice, Annie... (and more - will have to edit and add as I remember)!
Posted by Alexis at 11:08