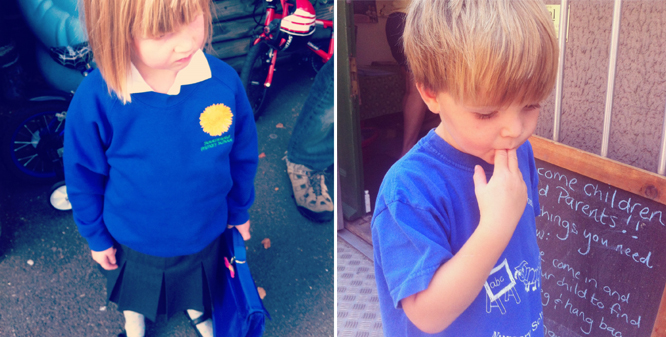 Here we go again - these darn kids insist on growing up too fast.
It was Henry's first afternoon at nursery today; and as with last year and Coco starting school it was me who was the emotional one - although he did cling to my leg and suck at his fingers in quite uncharactistic ways.
The step didn't feel too large though - he is ready and it's only nursery.

I remember when I first took Coco to day nursery when she was 10 months old (I really can't believe I did that... but it did feel ok at the time) I would see other parents taking their children into the over twos area of the nursery but I never thought I'd be there. Then suddenly I was - and now that is a distant memory and I'm taking my second child to nursery. I know it's obvious, time passes, but it still takes me by surprise when I stop to take stock every now and then.

So even though this milestone isn't such a big one I'm allowing myself to feel it.
And to all those new school parents out there I want to send you all a virtual hug.
I was shocked by how hard I found the first term of Coco being at school - the nagging unhappiness that I was feeling when I wrote this post didn't really pass for quite a long time. I hated the school run, the obligitory nature of our new routine the external pressures that I had no control over. Kind of all the same things I didn't like about school the first time around. Not that I didn't like school, I did, but isn't there a rebel in all of us that just doesn't like to be bossed around... especially when you get bossed around in letters written with Comic Sans.

I dearly hope if you are going through your child starting school that you and they find it easy, but if you don't then just know - you are not alone.

Sorry for my lack of blogging - I was swallowed by the Summer holidays black hole. I had a lot I wanted to blog about but... well, you know how it is, if I dared to try to go near the computer then there was guaranteed to be a minor catastrophe.
Oh yeah, and we went on holiday too - that was good; I may blog about it one of these days (Maybe in early November - what are your feelings about non-topical blogging, is it really such a faux-pas?)