Hugh's 40th birthday party feels like it was a long time ago now... but I have failed to do it justice here on my blog. 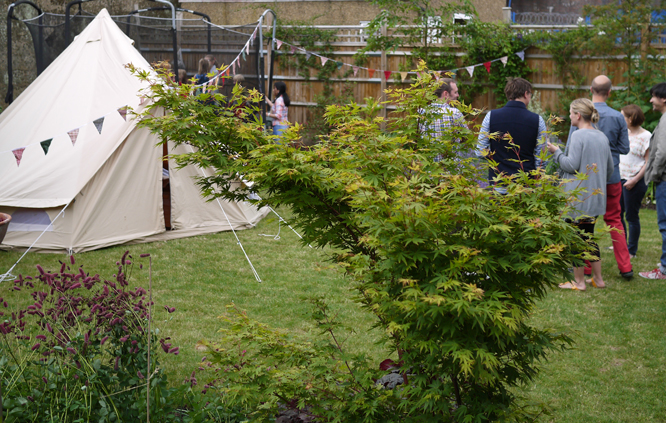 I'd been looking forward to an excuse to have a proper party in this house ever since we moved in... Me and Coco and Henry all have our birthdays between Oct and January, but Hugh is a summer baby so having a big bash for his 40th was pretty compulsory.

I started thinking about doing a surprise party way back in February. I must confess that one of the first things I thought about was how to decorate the garden (which ended up being a mute point as the weather was predicted to be bad in the run up, so, even though it was fine(ish) on the actual day I couldn't see all my decorating plans through) but I also wrote lots of lists with thoughts about food, entertaining children, booze etc etc.
There were so many things I didn't do - but here is a run down of what I did do: 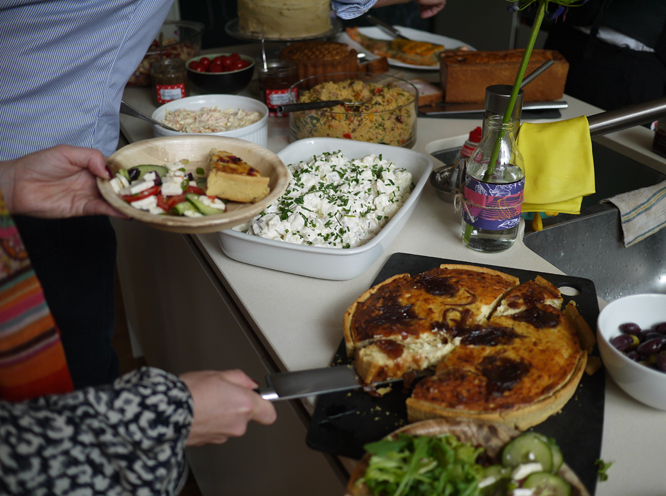 Now, 99.9% of the time unsolicited mail and leaflets that fall out of bills or magazines really F***ing annoy me.
But the day the 'watirose entertaining' leaflet fell onto my lap I was a very happy girl.
I'd planned to try to cook a chicken chorizo and chickpea casserole for the 80 people I'd invited. I was going to cook it in batches and freeze it ready to defrost all together on the day and serve with bread... But one batch to feed ten took me the whole morning to make with Henry 'helping' and didn't even taste that good (Hugh came home and 'improved' it later...)
The following few days after my test run I was awake at 5am worrying, but then the leaflet came. I didn't log on to waitrose straight away, I let myself sweat a few days before going online at 4.30am and ordering £200 worth of food which turned up on the morning of the party and recquired the minimum of effort from me. And it was all really good. Considering it probably cost me about £20 to make the casserole I'm pretty sure I almost saved money too!? Hmmm, well maybe not, but I don't think it was bad value.
We topped up with a few extra salads and bread and my friend bought over a load of chutneys left over from a school fete stall, strictly I probably didn't order quite enough - there was nothing left apart from a morsal of coleslaw... lesson for next time, but as the afternoon went on there were ice creams for children; cake and then at about 6.30pm we did a pizza run to Franco Manca for the stragglers who were still hanging on in there.
I got the bamboo plates and wooden cutlery - which are now being drip-fed into our compost bin - from Little Cherry a very good online shop with lots of eco party supplies. 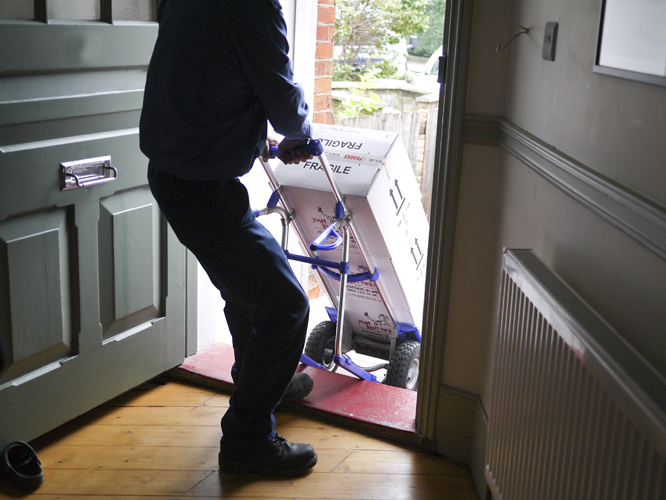 The Fullers brewery is on our doorstep; so a cask of London Pride seemed almost obligatory but I also ordered (far too much) wine and fizzy stuff from Yapp Brothers a fantastic wine merchant based in Mere in Wiltshire who specialise in French wine. Hugh is a big Yapp Brothers fan and I think still would be even if we weren't friends with one of the Yapp brothers. Tom used to live opposite us in Hammersmith; we spotted a car with their branding on it parked on the street a few times, then Hugh did a tentative order online and so we met Tom and the rest, as they say, is history. 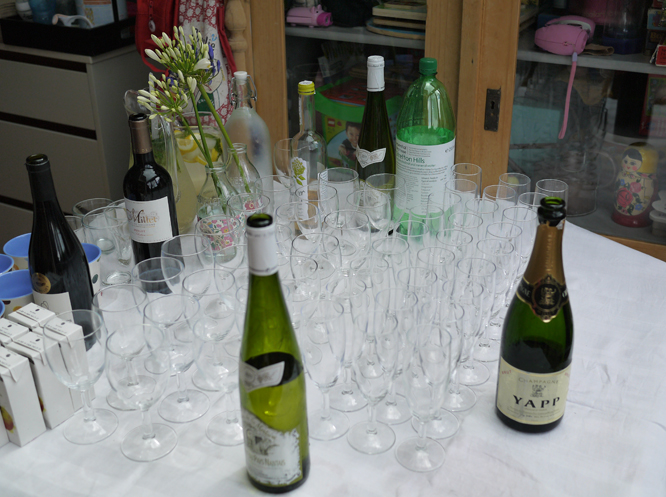 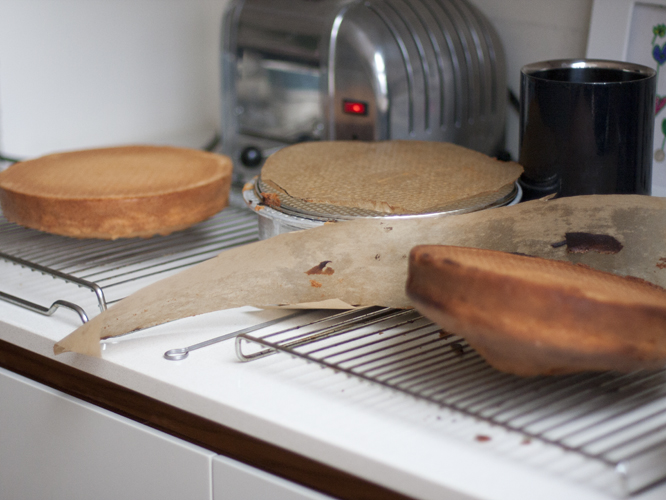 As I'd opted myself out of doing any cooking bar a couple of salads I felt I HAD to make the effort to make a cake... I'm not really a baker, but with a little moral support from a friend who came and sat with me while I made it (essential to keep Henry at arms length from the action) I made a huge Victoria sponge. Hugh would have prefered chocolate, but by the Thursday before the party I wasn't into the idea of taking risks... 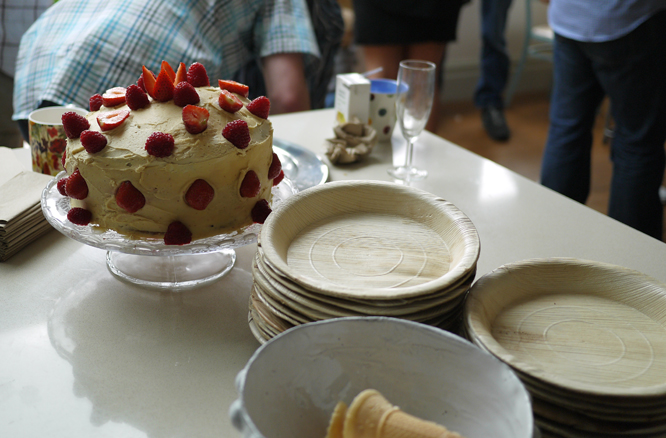 I smothered it in a vanilla butter cream icing and someone at some point during the party put a load of strawberries on it. I might have had a bit too much to drink by the time it came to sample the cake; but in my memory it tasted pretty good. 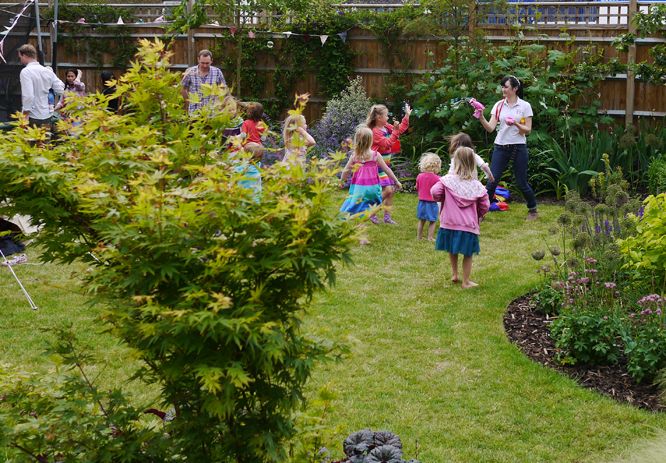 Because we are of an age when a lot of our friends have children it felt natural to have a party that included children (and include children it did; over 40 of them) but I also wanted to lay on enough for them to do so that the grown ups could have a good time. I must confess I threw a bit of money at this problem - I hired a party entertainer (not something I had done before) but it was one of the best things to spend money on. I booked her through Cheeky Monkey's parties and she was great, bubbles, glittery tattoos and lots of balloons. 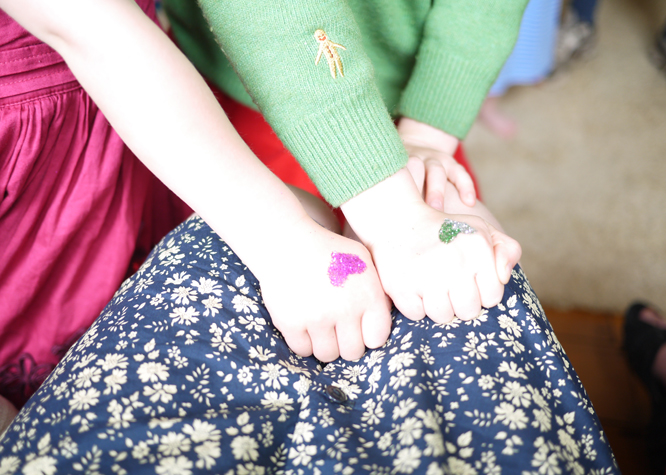 I also asked a neighbours nanny to come over and help out with babies - we had 23 children under three around, so again that was money well spent. 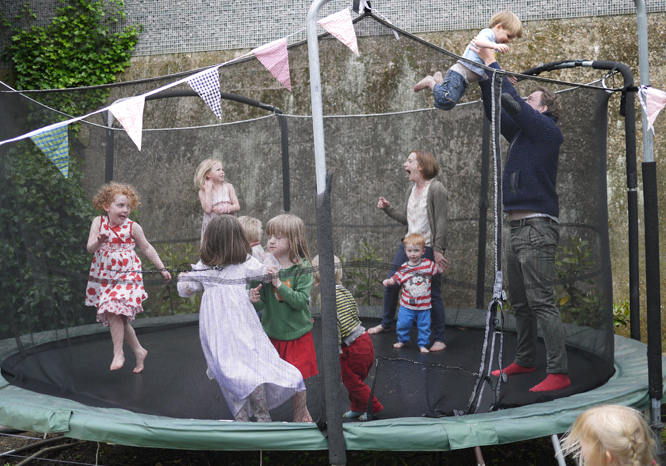 Of course most of the time they did all manage to entertain themselves...
How many children can you fit on a trampoline? A lot. 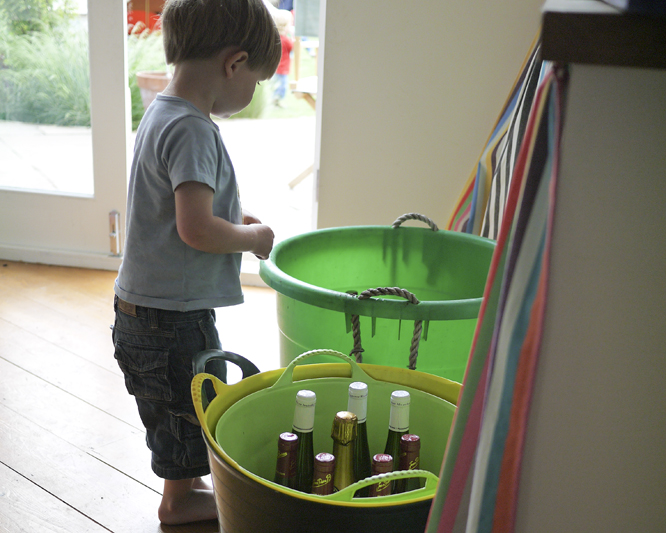 Now this was a bit of a luxury and seems like quite a crazy move, but I also hired three lovely helpers to assist in keeping the drink flowing, serve food and make ice creams for the children etc. They were recommended by a friend-of-a-friend who is a caterer and they were BRILLIANT. They didn't stay for the whole party just the first couple of hours but it was great - they helped get the door as people arrived sort out coats/bags/buggies and they kept people's glasses topped up. I want to have parties with staff forever more. I won't be able to though, but for a seriously special occassion it was perfect.
I quote one of my friends who texted me the following day:
"Look at you with all those staff!! to the manor borne!"

Henry wasn't on the payroll - but he did try to help. Buckets of water and ice - what's not to love!? 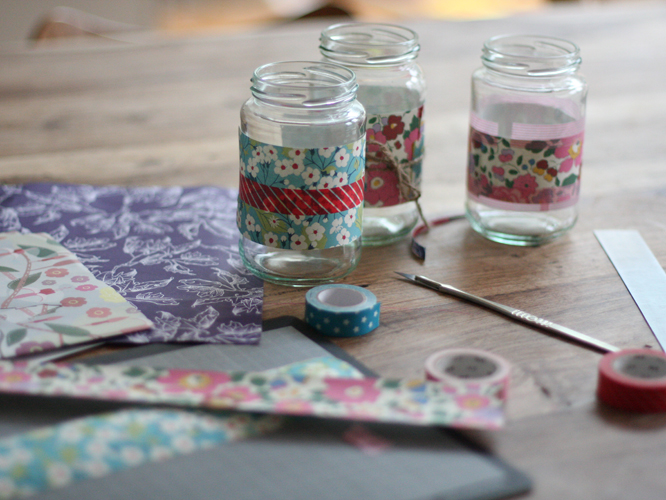 IF the weather had been better I was planning on trying to seat everyone outside (the lists of people I had that I could borrow tables from was long...) and I wanted bunting and decorations hanging from the tree and jam jars of flowers on the tables. I even planted sweet peas extra early in the hope that I'd be able to pick them to decorate the tables... but it wasn't to be; in the end I used my jam jars and milk bottles decorated with offcuts of wrapping paper and washi tape for flowers inside (bought agapanthus and catmint from the garden), the few tables I put out had small terracotta pots on them - we still used bunting (borrowed from a friend who used it for her wedding) around the bell tent. 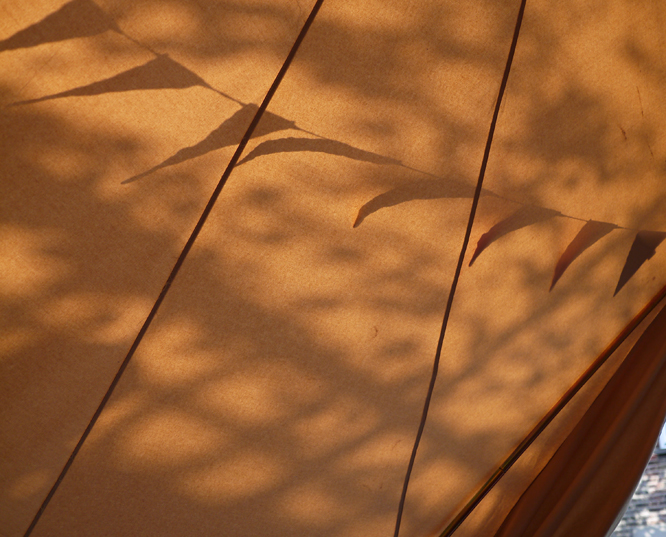 Having the tent up was great - not only did it serve as a wonderful screen for the compost heap but it was used for kids to craft in and adults to sneak off and have a lazy lie down and chat... I do love our tent. 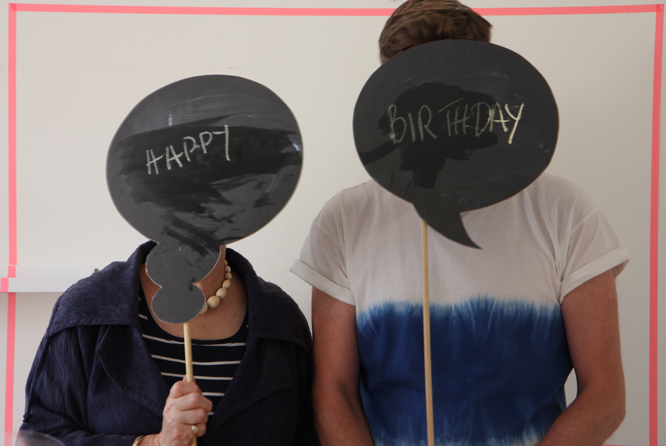 The other bits I did were setting up a homemade photobooth - mainly as I knew I wouldn't end up taking many photos and to make some little activities for the children to do... both of which I'm planning to post about separately! 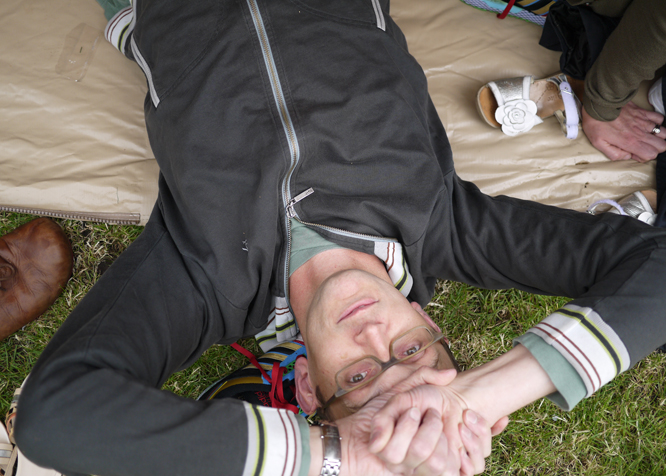 At the end of the day Hugh was a very happy nearly 40 year old.


So - that's the end of part one. You might get a part two and even a part three if you are lucky so stick around...

Side note 1: This was a ONE-OFF party, I'm normally much more frugal than this post may depict me - but I'm being honest... ok!?
Side note 2: I was too busy having fun to take many photos - and naturally things weren't ready far enough in advance for me to spend some time taking photos pre-party so apologies for the lack of illustrative images.
Side note 3: I had hoped that my daughter might wear one of the many beautiful outfits she has; but on the day she a right stick-in-the-mud and insisted on wearing her red dress. Yep; the one she wears every bloomin' day of the week. Urgh.
Posted by Alexis at 21:47