Somehow, out of what sometimes feels like nowhere, it's happened. I'm the mother of a five year old. It was Coco's birthday last week. 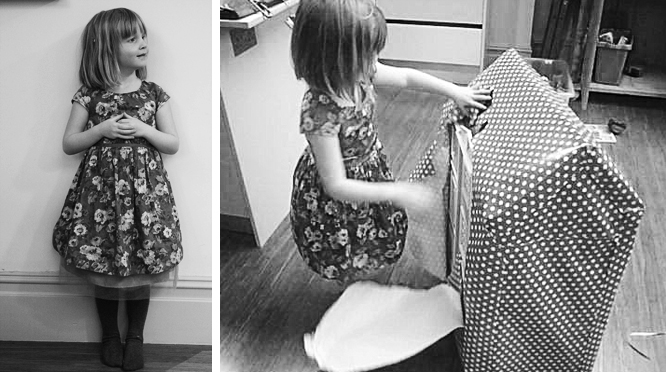 She got her dolls house (the requested present) and her oil pastels, and a lovely clock too; which she doesn't seem to mind that we've put up in the kitchen, even thought it was/is meant for her room.

We had a nice evening on the day, dinner out with our friends and their kids, but of course for Coco the main event was her party. Which, really wasn't a party at all, but lucky for us, she didn't seem to notice that.

She had four friends over, we did some speedy cake decorating and then we took the bus - the top deck, naturally, to our local theatre to see Chicken Licken (during which I ended up with two children on my lap as they were scared of the fox) and then we got on another bus to Coco's favouritist restaurant (it's Franco Manca, she's got pretty good taste for a five year old) where they devoured a couple of pizzas, a tonne of olives and quite a few scoops of ice cream - while Hugh and I managed to enjoy a glass of red each - seriously, we enjoyed it, pretty unheard of for a children's party. 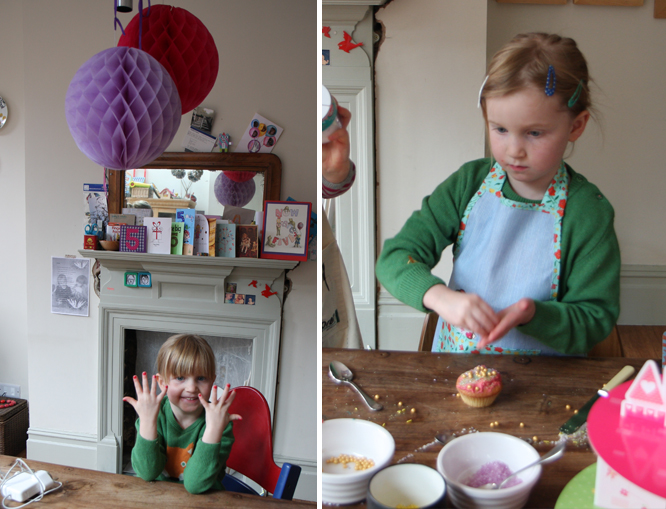 Coco in pre-party excited state (and delighted at having nail varnish on... against my better judgement) and tackling the serious business of getting as much sugar onto her cake as possible.

Hanging out at the bus stop, and five very busy girls waiting for pizza.

Finally we headed back to ours for a bit of a boogie to Abba and the current favourite; My Old Man's a Dustman. Then we packed the children off home with their decorated cup-cakes and my pulled together at the very last minute party bags - which I'm going to post about tomorrow!

It was the least stress / most fun birthday celebration so far - although not stress free of course. That would be a birthday party in a parallel universe.

- The first time she was featured on this blog was when she was still two, enjoying some rubber stamping (still a favourite activity).
- Her third birthday party
- Her fourth birthday party

PS - thanks to Amy at Tots 100 for featuring me on the Fresh five list today, I'm very honoured - and have found some nice new blogs to look at too.
Posted by Alexis at 22:41

Labels: motherhood, Motherhood and Family Life, Nice Stuff, something i made