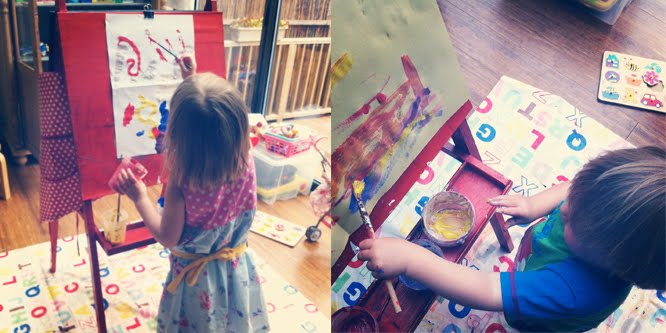 When my parents came to stay the night a couple of weeks ago we moved Henry's cot into Coco's room and then we couldn't be bothered to move it back... so now Henry and Coco are now sharing a room - and it's very cute (most of the time). Every morning Coco climbs into Henry's cot and when we go in to get them they are playing or 'reading' together, plus we've had a couple of mornings where we have almost got a lie in. On the downside we've had a couple of extra early mornings where Henry has objected to Coco invading his space. I'm also not sure exactly when she does climb in; the other day I asked her how long she had been in there (stupid question to ask a four-year old) "12 hours" was the confident answer.

So, we might leave them together, or we might not, we haven't really decided, nor will we, it's just not really the way we do things (you know, plan ahead). I know that accidental parenting is a term used negatively to refer to all those snap decisions (like bribing your child chocolate to get them to stay with a baby-sitter) that somehow then become unbreakable habits... but I feel like this is the only way Hugh and I parent and not always with bad outcomes... maybe 'whim parenting' would be a better description?

We've made lots of accidental choices over the years; Henry's first food was a lamb chop - he was sitting at the table with us while we were having our dinner and so we just let him have some... so started Henry's weaning.

Coco stopped sleeping in a baby sleeping bag the day we moved into our house and realised that we'd left all the grobags at my parents house so she had to sleep with a double duvet in her cot instead (the next day we bought a sensible sized one) and that was that.

Both our children are very confident on the stairs as we never quite got around to buying/installing stair gates, and we only had a few accidents!

Coco first 'slept' through the night when we forgot to put the monitor on one night - she used to sleep on a different floor to us - who knows if she woke or not but it was a revelation to us that she'd survived the night without milk/intervention, so we no longer leapt up at every squeak.

Even our nursery (and now schooling) choices have had a strong hand of fate... and we've been alright so far. I guess I'm writing this post for me - to remind me that this is just the way we do things. Other people telling me about their plans for 2014 sends me into a panic... but sometimes however much you try to control your life it determinedly takes another path. So I need to remind myself that going with the flow suits us and me - and there is no point fighting yourself is there?