At some point in the middle of the night a couple of weeks ago I had a brainwave. It was the marriage of two ideas that I'd been pondering. I decided to have a Christmas wrap party. I would invite people to my house for a charity coffee morning with the added bonus of providing lots of paper and tape so that they could bring their Christmas gifts to wrap up too - all for a donation to charity of course.

Most of my middle-of-the-night ideas never come to anything, but the next morning I was still thinking over my idea (although of course there was much wrangling over the fact that I was about to host a coffee morning shoot me now!). So I picked up the phone and called my friend Lynne; the owner of Papermash - a superior online purveyor of very tasteful stationery. Lynne not only didn't think my idea was mad but also offered to bring over all her samples for people to use.
So that was that we were on! 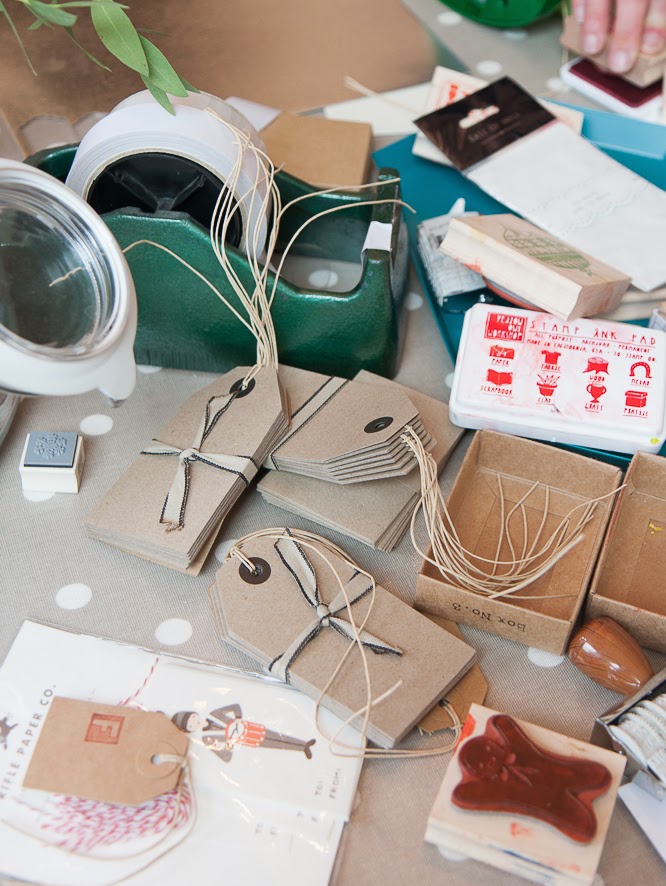 It was a pretty relaxed affair, we kept things simple (mainly as we pulled it together in a week) - I had my normal party paranoia that no-one would come - especially as on the morning of the event my phone was pretty much constantly pinging with messages from people who couldn't come (you know just as I was trying to lay out enough food to feed an army) but in the end we had just about the right number of people. 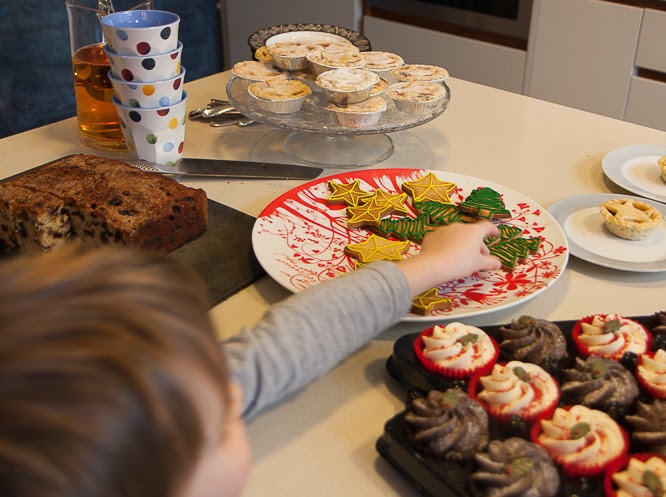 A friend donated 100 mince pies (the result of a communication error by her company to a baker in Yorkshire was our gain), I made some ginger biscuits and my mum made a pound cake which went down very well. 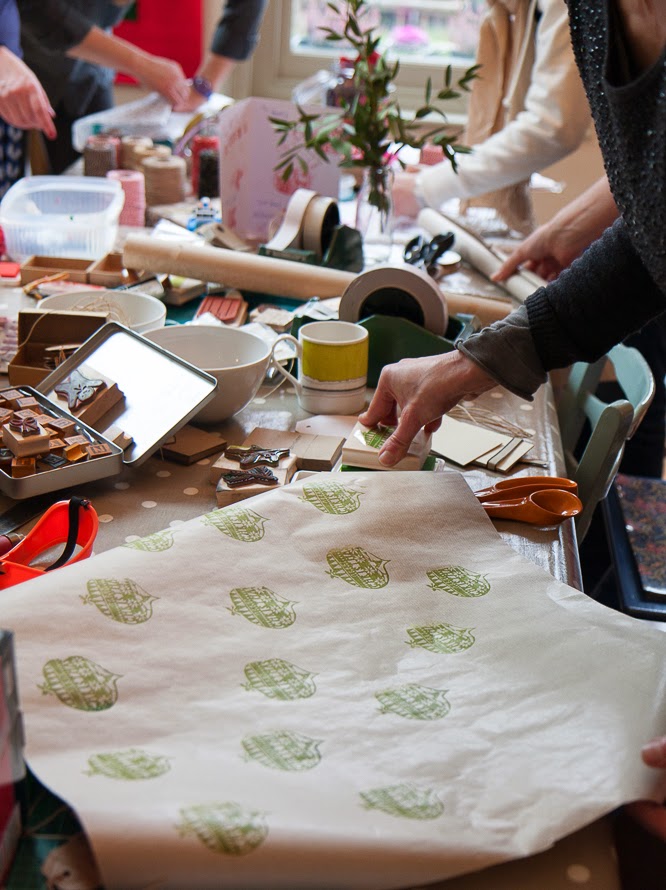 Lynne's suitcase of delights brought forth - beautiful string, gift tags, glitter tape and the best collection of washi tape ever (there's still time to get some for Christmas people...)!
Her rubber stamps collection is amazing. And they look great on brown paper - I think pretty much everyone was convinced of that....
The only thing we were a bit short on was wrapping room... 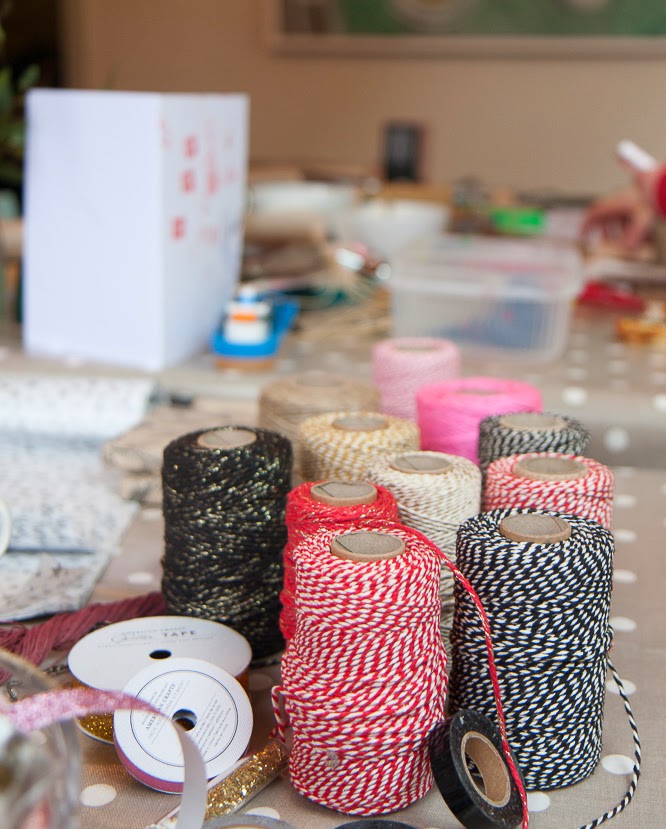 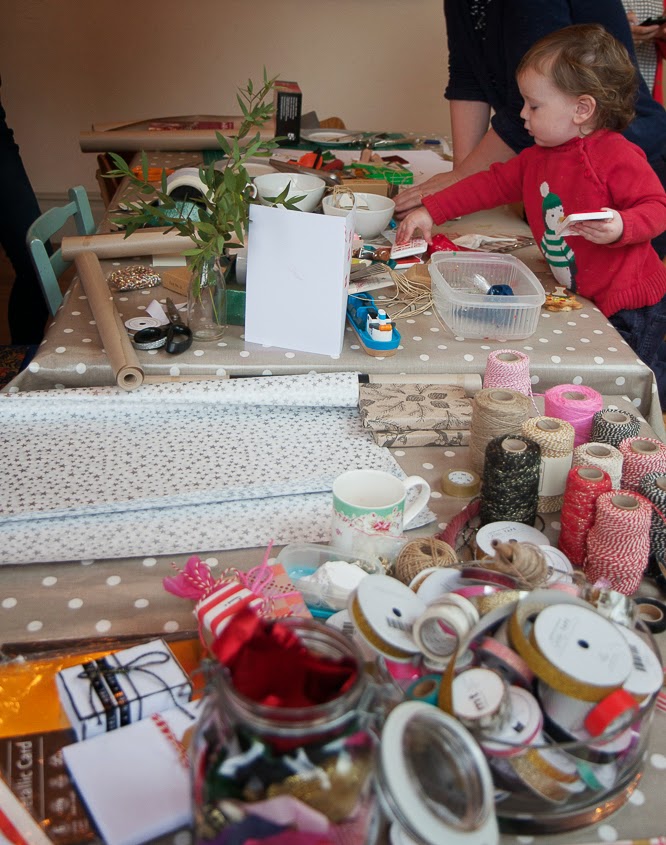 As always with these things I wish I'd taken a load more photos, but the two hours past in a blur of door answering, tea making, mince pie warming, chatting and wrapping. It was both chaotic and really fun - plus we raised £160 for my friend Emily's charity The George Oliver Foundation - a grant making charity set up in the name of her first born George, one of Coco's first little friends who sadly died suddenly when he was just 14 months old (I've written about her charity here before). 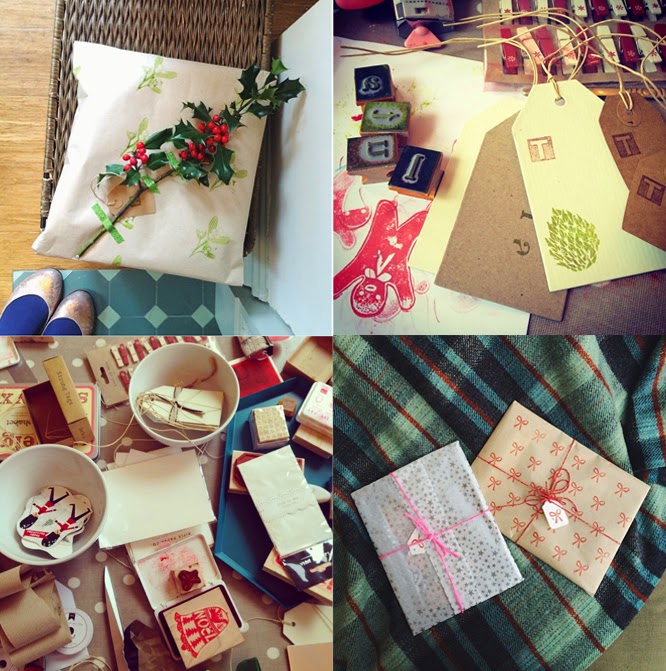 As Lynne and I agreed at the end there was a huge satisfaction in just having done it, so many ideas come and go so to execute something at pretty short notice and have it be successful was great.  I'm definitely going to do it again next year - but this one was a very good practice run.
Posted by Alexis at 12:04

Labels: Holidays, Homemade Gifts and Cards, Homemade Stuff, My Home and Interiors Inspiration, Nice Stuff, Projects, something i made