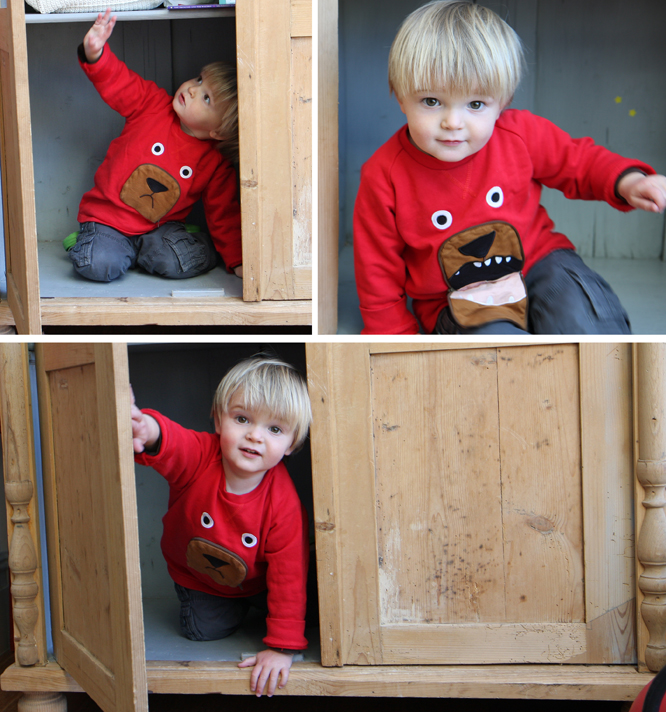 Henry is 20 months and 2 weeks.
And, in my humble opinion he is uber-cute.

Of course I should be keeping a more regular update of what he is like* but the time flies and I never quite get around to it and then the moment is passed. So instead I'll just give you a snapshot of today - one rainy morning at the beginning of October 2012.

We biked to school to drop off Coco and Henry reached out longingly when we past the playground, too wet I told him, "bit wet" he says back. When we got home he wanted to ring the "bell" this has become a bit of a routine... then he quickly got distracted with Coco's scooter which is just outside the front door, so I let him have a little 'scoooooot" up and down the road in the drizzel. He got frustrated when I wouldn't let him go all the way to the end of the road. I told him he could do the bell again, so he eventually turned back willingly.

Back at home he insisted on helping to carry the scooter in while I got the bike inside. He asked me to take off his bike helmet by saying "click click" - then he tried to take mine off for me.

As it was raining properly by this point we ended up just hanging out at home, we did lots of shape sorting, he can say most shape words, but mostly in a parrot fashion after I tell him what they are, the same with colours. He loves the nesting barrels, unscrewing them especially, when he can't twist them shut he asks me to "peas help". He played with the duplo cars, linking them together and pulling them along, we built a tower out of the stacking boxes and he did his best dirty laugh as he knocked them down again - after pointing out a few of the animals drawn on the outside.

He spent a long time 'cooking' up various little bits of plastic - that was before he helped with some real cooking - our resident health and saftey expert likes to point out everything hot and hangs around my ankles while I'm cooking a lot. I let him pour some milk into the sauce I was making and help (in the loosest sense of the word) grate some cheese - he mainly ate it. Then he played with a load of dried "'asta" on the floor - which I quickly regretted as the thing he seemed to enjoy most was spreading them all over and laughing...

He disappeared off to my 'work room' and I caught him sitting at my desk (like a mini bond villian in my swivil chair) with my pens, some pink on his face as normal - this boy loves to suck a pen, and he carried around Coco's bag and shouted 'CO CO' (he can produce serious volume when he wants to). Then he reset the washing machine dial, even as I stood there telling him not to. He cannot resist a switch, or knob or button.

After eating about half the lunch I gave him (and a lot of complaining about it being too hot, and saying "uh-oh poo" in the middle of it) I gave up and let him have a banana, which he scoffed so fast it looked like he inhaled it. By the end of lunch he was rubbing his eyes, so we went upstairs where I put him in his sleeping bag ("pop, pop, zzzzzip" - he says) and we read a couple of books over and over "again". He has only just started sitting still and looking at books in the last few weeks but is fast developing a few favourites. Current obsession is 'Where's Spot', he knows most of the animals, although insists the lion is a frog every now and then. He likes to tell me when it's "the end", and although he didn't do it today he has started to say "night night" as he knows what is coming next. Into his cot he goes with his "gwent" - an old grobag that he cuddles, we have no idea why he calls it gwent.
I shut the door and he mumbles away - if he gets too noisy or stands up I talk to him through the monitor (his very own big brother) and tell him to ssshhhhh or lie down, which he often does. He didn't do it today but he quite often points to the monitor trys to say it and then says "Daddy" instead.

Then it's an hour or so of peace for me. Phew.
So that's it - our morning - not the most thrilling; but precious, as this little boy is changing so fast, it's rare that we just happily hang out together and it was nice.

Oh, and the top, it's from Tootsa MacGinty Coco chose it when we did her school uniform shopping trip (which we actually ended up doing a few days after she started, typically)! I think it's the cutest top that I've ever bought. I found £1 in the mouth/pocket the other day too... although, I'm guessing that might have come from my purse.

*I love reading the updates that other bloggers write about their kids. Abigail writes about her little boy Theo who is about the same age and Sarah's little boy Stanley is quite similar too sometimes I feel I could just copy and paste their updates!
Posted by Alexis at 14:10