I was hopeful for gorgeous weather for this summer - after our trip to Venice at Easter we decided to stay in the UK over the school holidays and try to keep our plans spontaneous. 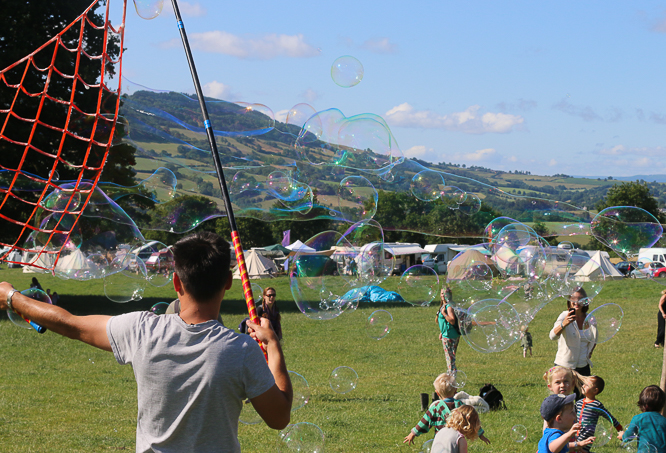 We started off well with a trip to Wales for Starry Skies festival where we had a wonderful few days, despite the rain.  I think it would have been a lot better to have had three days of gorgeous sunshine, but the one day of sunshine was lovely.  And we had as much fun as you can hope to have while camping at a festival on the rainy days*; making lemonade bread to bake over a fire in the woods and spending a couple of hours dancing to a great selection of throwback rave tunes in a beautiful tent, plus a wonderful yoga session run by Sally.
*As my camera stayed dry in the tent I've no rainy day photos! 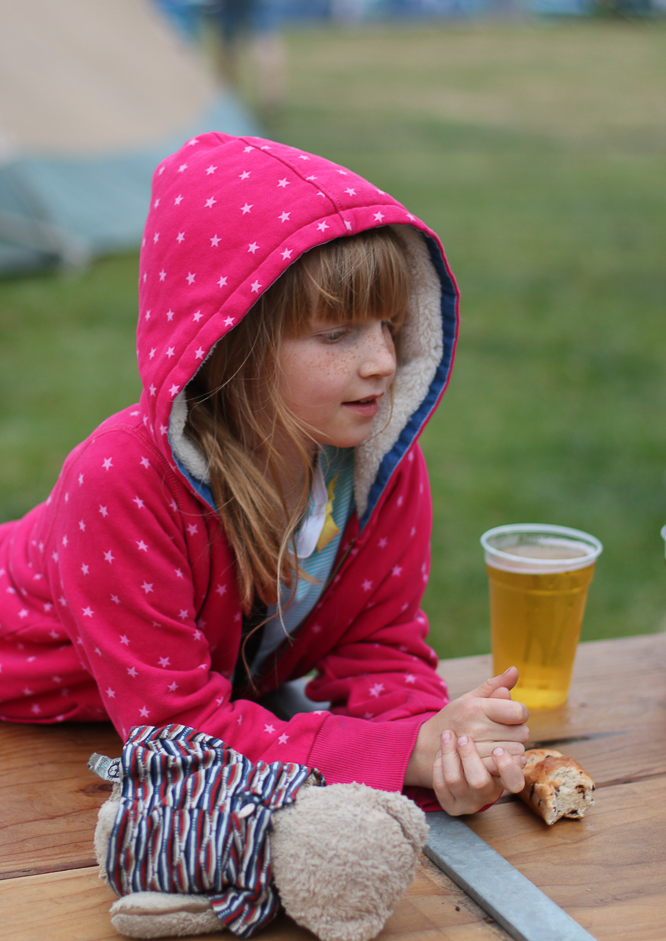 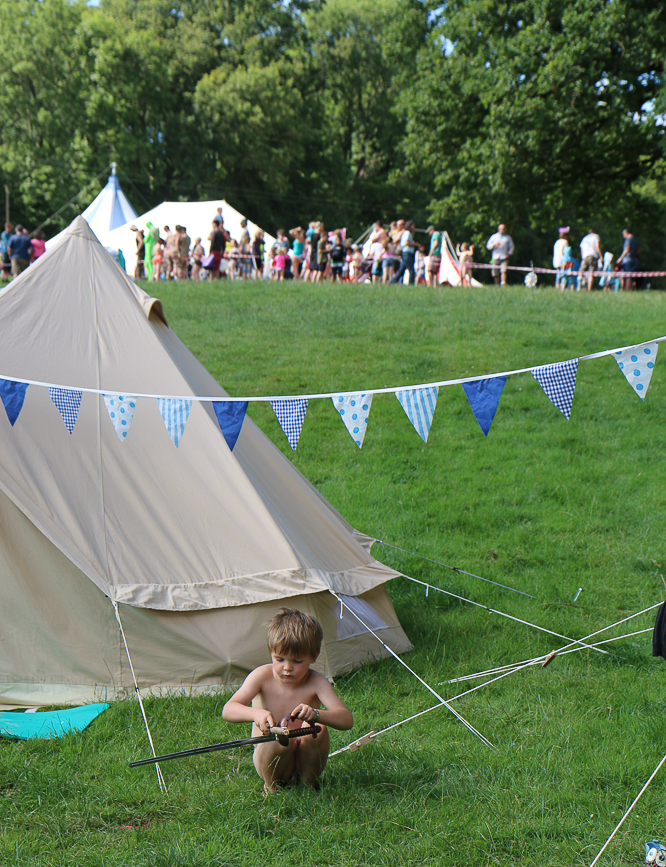 Hugh had the week after Starry Skies booked off work and we had plans to carry on camping but with rain forecast for the week ahead we had a re-think and came back home hoping to re-schedule a trip for when the weather got better.  Only it didn't really get better.  By the following weekend we'd decided to just go with the flow so we packed the car up again and headed down to Dorset where we had a wonderful time at Jim's Place - the campsite made infamous by the wonderful Artemis over at Junkaholic.  The sun came out and we enjoyed just hanging out together; it was the only the second time we'd ever camped as just the four of us and it was wonderfully gentle. The site is tiny but there were only a few other campers - families like ours and the children all played together. We cooked on the fire and read together in the evening (Goth Girl by Chris Riddell). 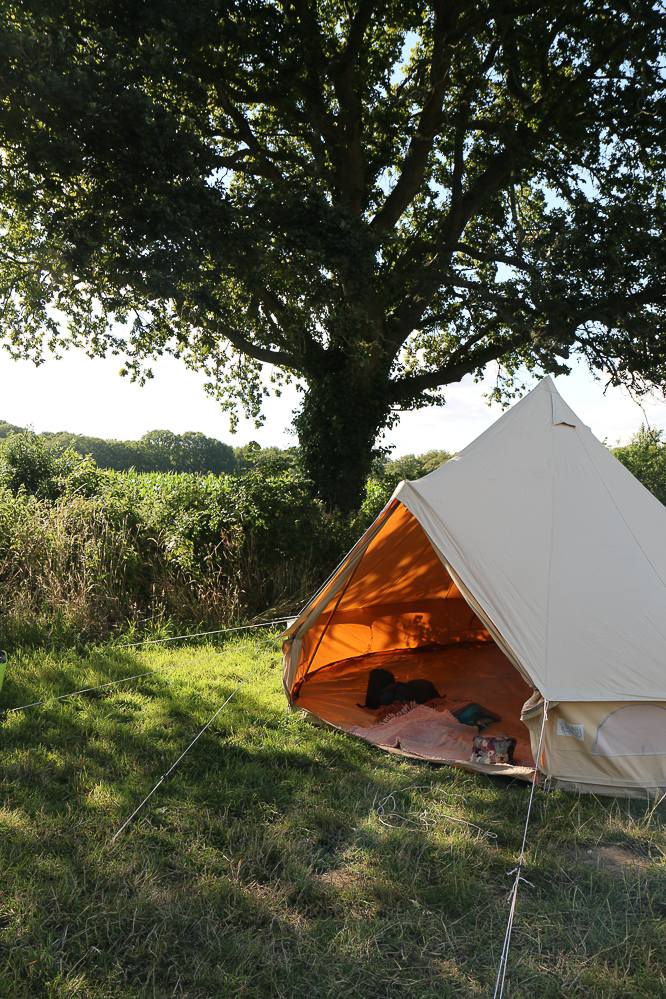 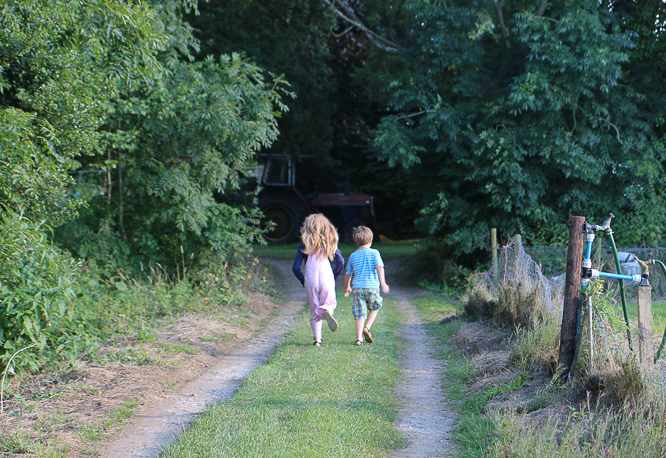 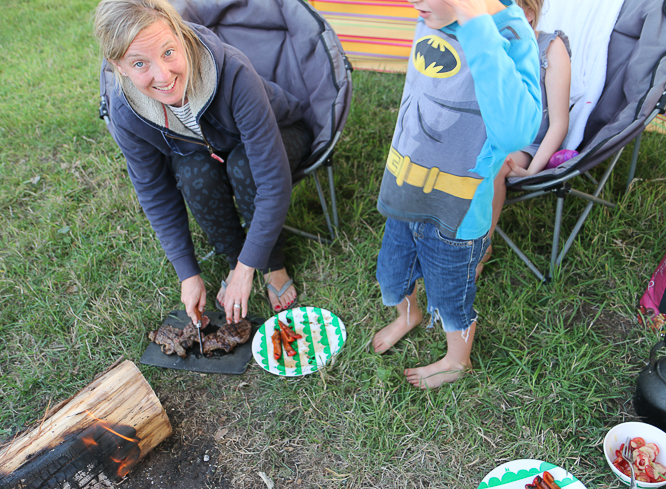 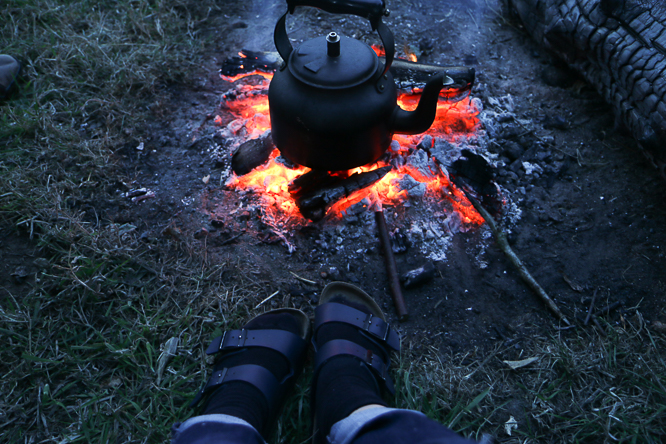 Typical camp view - socks and birkenstocks plus fire with kettle on.


We had a glorious day at Durdle Door - now nicknamed Dumbledore by Coco - where we stayed on the beach all day and cooked sausages for lunch, swimming in the sea. I've never been to a British beach where I've head so many foreign languages spoken - it really is on the tourist trail, but it's not surprising as it is beautiful. We all got a little colour that day... 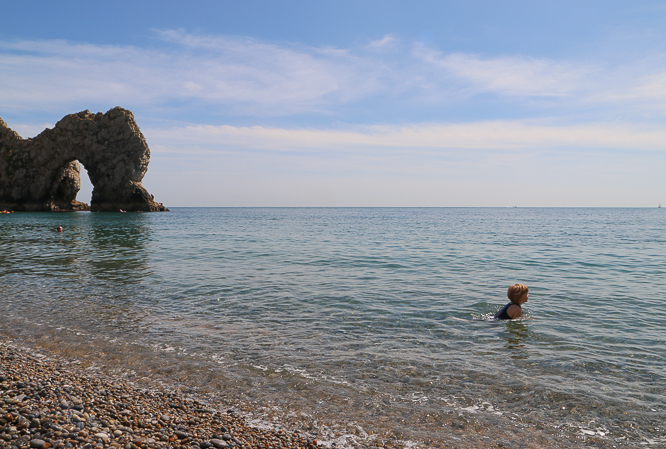 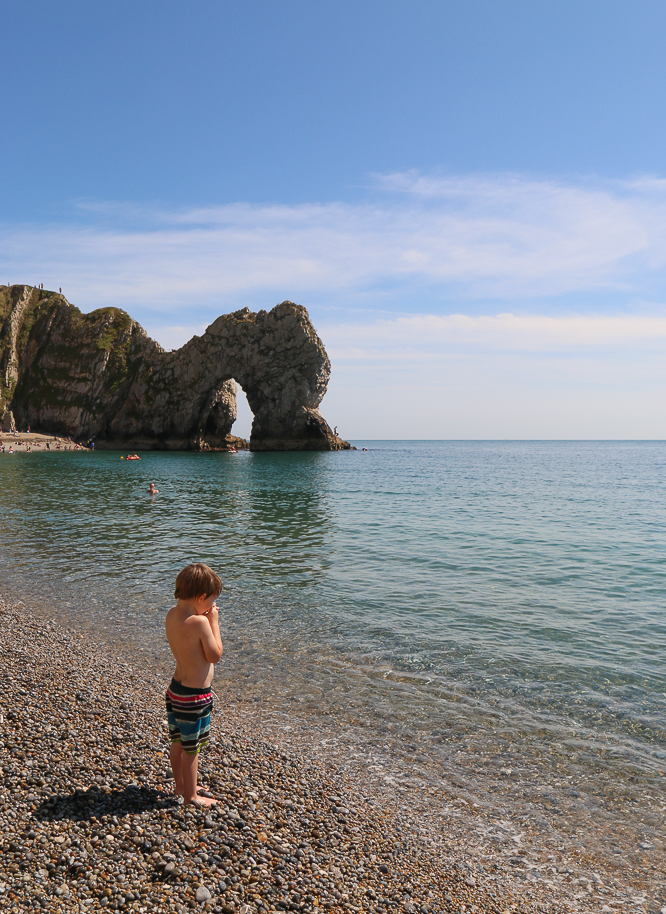 Henry - not quite so sure about the chilly seas! 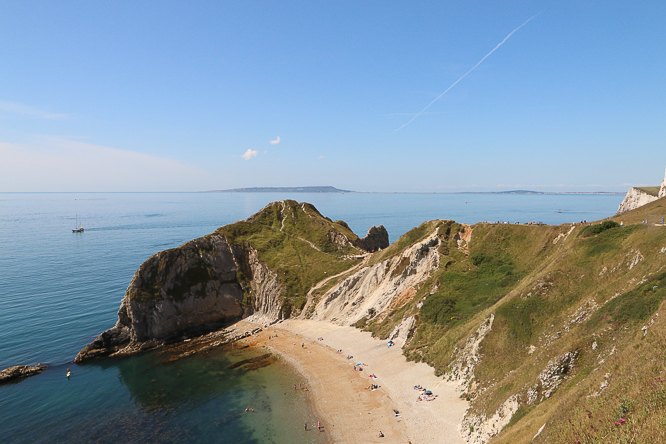 After a lunch stop-over at Hive Beach (where we went at half term) we left Dorset and headed further west to Cornwall where we explored the Lizard - one of our favourite areas. We had one more sunny day which we spent on Kynance Cove beach before the weather turned a little more unstable. 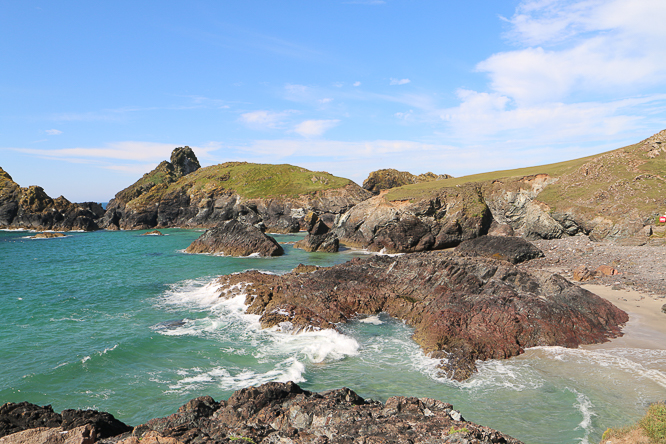 I just love this beach... we got there just as the beach was beginning to appear as the tide went out. 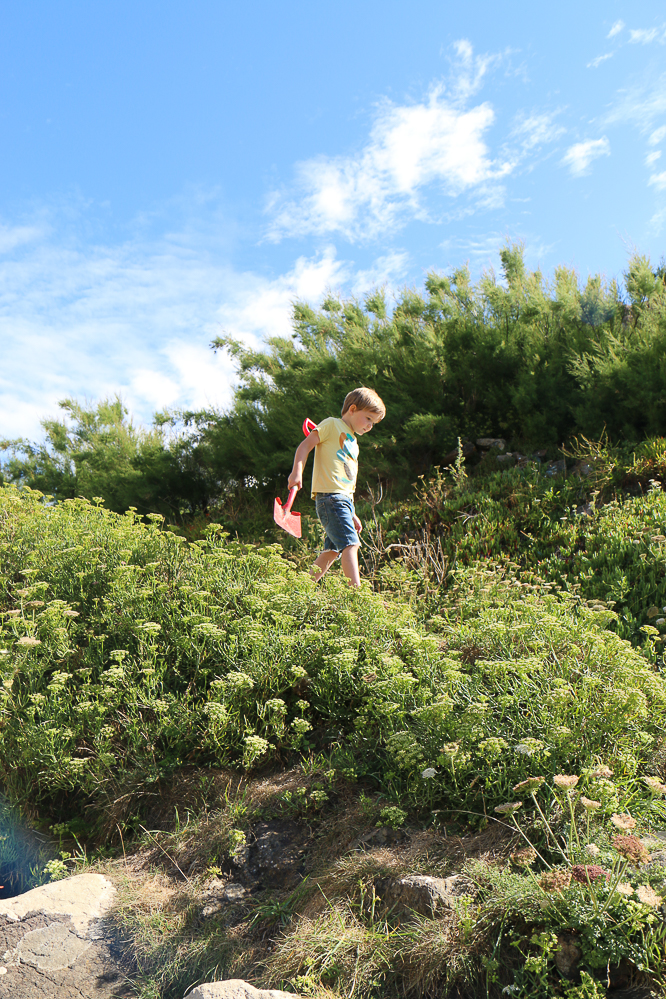 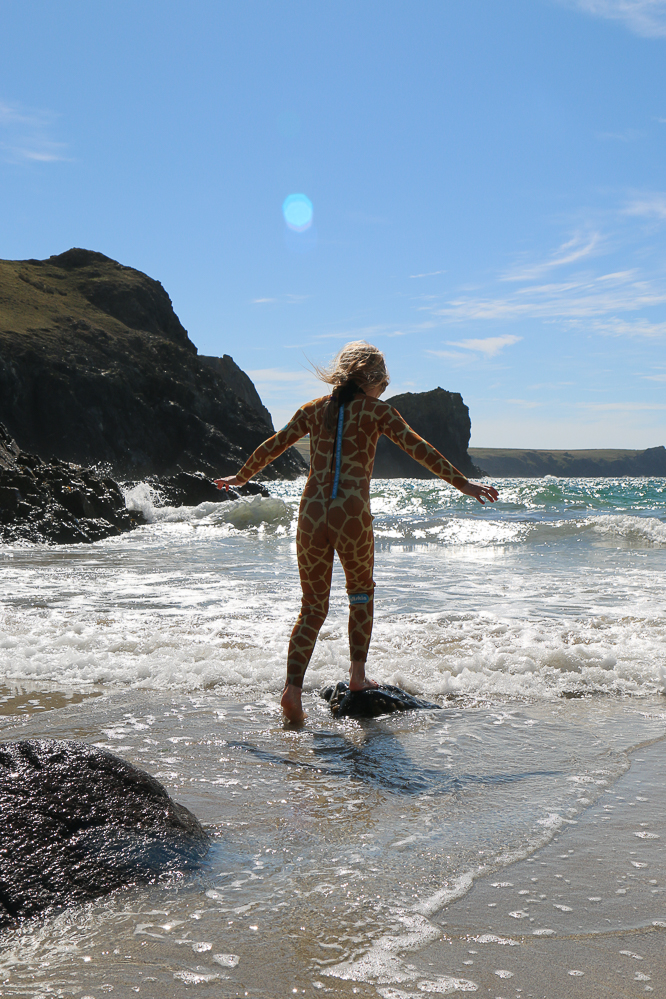 We booked ourselves into the Polurrian Bay Hotel - which we went to a couple of years ago and loved. There's nothing like a family hotel to give you a real break. No hassles at all and very happy children who insisted on going to the kids club every morning; no talk of beaches or swimming could dissuade them from having their two hours of play at the hotel; we didn't argue too much but instead played tennis every morning; which was quite comic in the wind but good fun and meant I didn't feel so bad about having a blow out meal everyday. 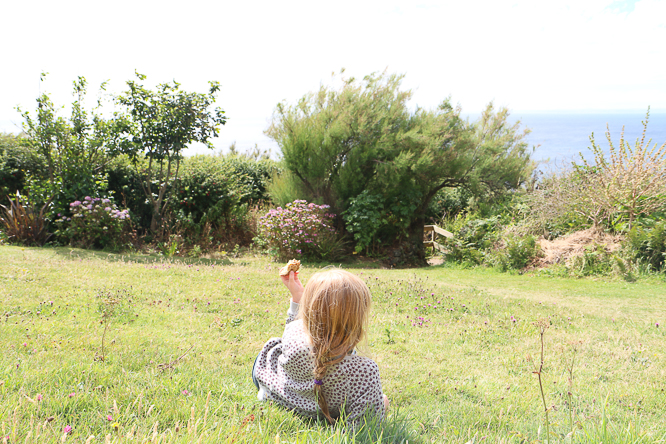 As much as the hotel is great for the food and childcare and all the attention to detail that make it so relaxing for parents (evening activities, kids meals, Sunday morning club meaning you can have lie in, treasure hunts around the hotel and grounds, playground, swimming pool - I mean really, what is not to love?), the absolute best thing about this place is the location. The views of the sea are restorative on their own plus it's an easy walk to the beach - only five minutes to the nearest; Polurrian Bay itself and then about twenty minutes to Poldu beach - a huge expanse of sand at low tide with rock pools and a beach cafe. We borrowed bodyboards at the hotel so Coco could have a go... there was moderate success. She loved it and then quite shortly after stating that it was BRILLIANT, a wave knocked her under and then it was more of a hate thing. The first day she tried the sea was quite rough though and I was pretty impressed that she even gave it a go. 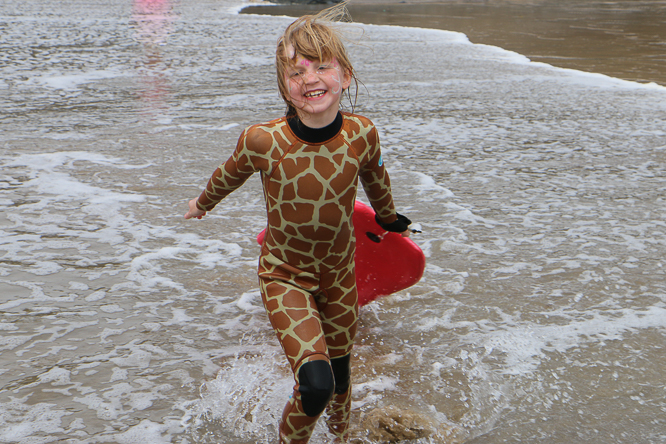 The moment she loved body-boarding... (and getting good use of the Saltskin wetsuits) 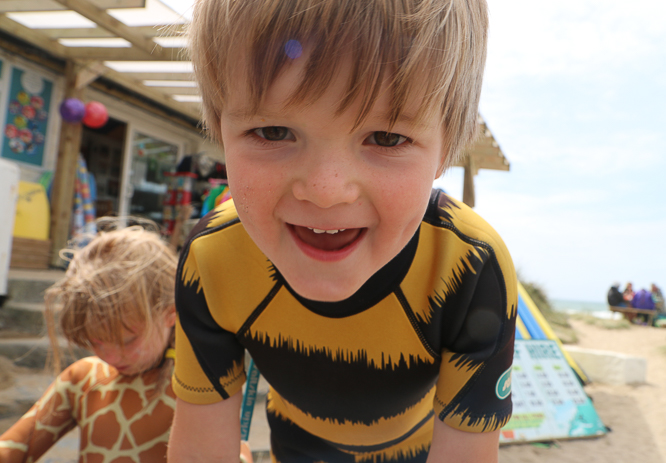 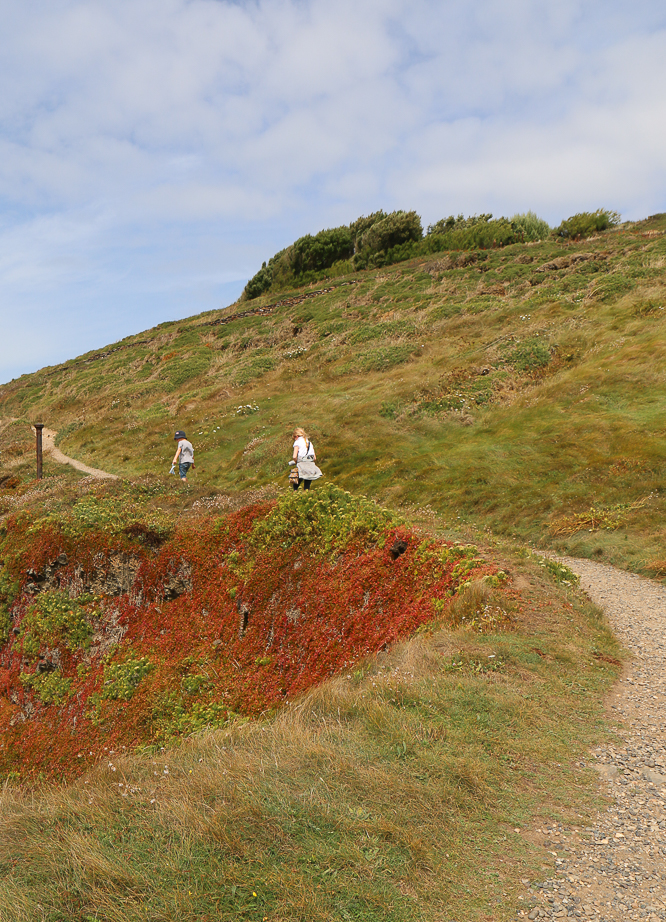 The day of the rough sea meant the beach wasn't as much fun as it had been so after lunch at the beach cafe at Poldu we got in the car to explore some other beaches nearby - the children both promptly fell asleep so we decided to take the opportunity to drive for a little longer and we headed to the Helford river. We found ourselves at Trebah Gardens an hour before closing time but we bought tickets anyway. We were all delighted by the gardens, plus they don't actually chuck you out of the garden, they just close the cafe and visitors centre so we actually did have time to make the most of our tickets after all. I love seeing impressive gardens - Trebah is mainly a woodland garden which stretches out down the valley to its own little pebbly beach on the Helford. There were agapanthuses galore and so many hydrangeas - the children loved the tunnel through the gunnera and discovering the bridges and brook-side pathways and the playground in the woods at the end which we really had to drag them away from. 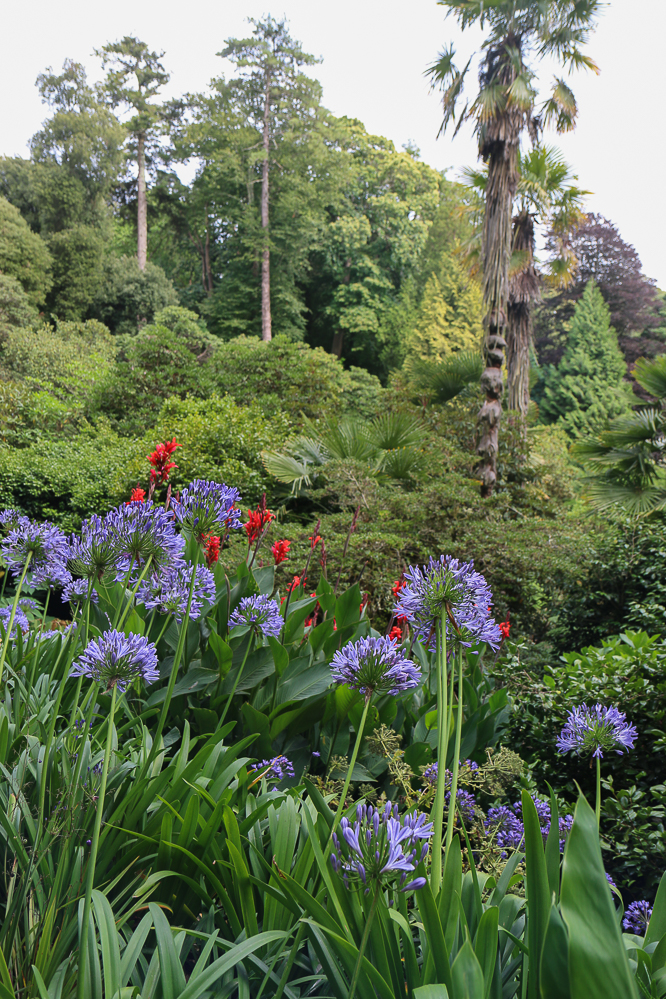 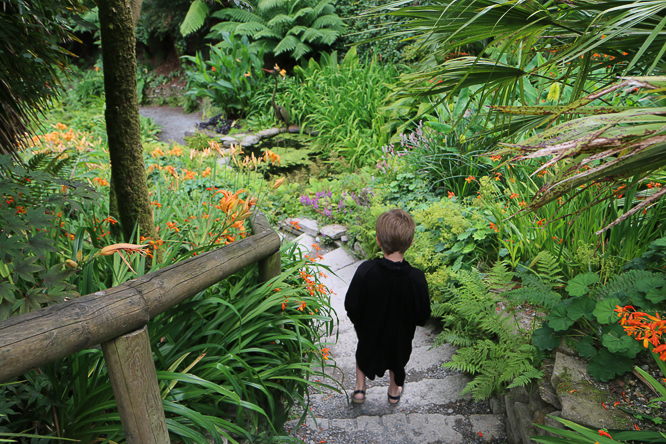 Henry was still in his wetsuit - so we took it off and he wore one of Hugh's jumpers instead. Made him look very monkish. 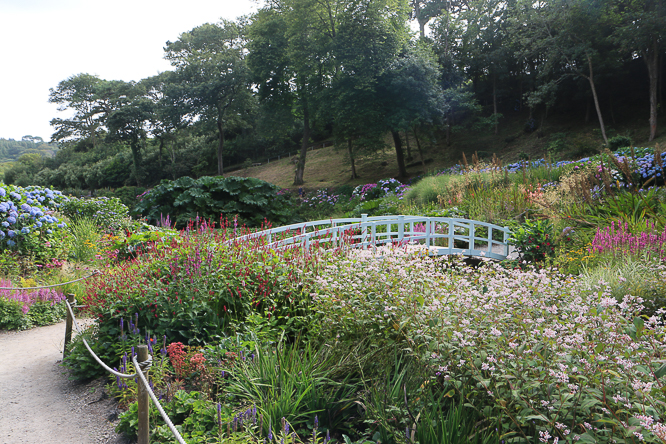 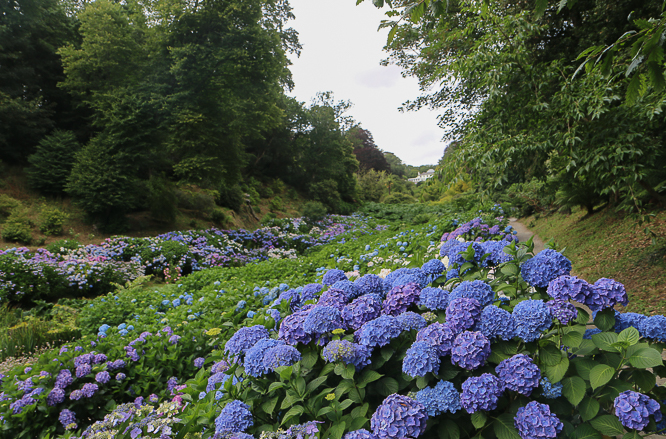 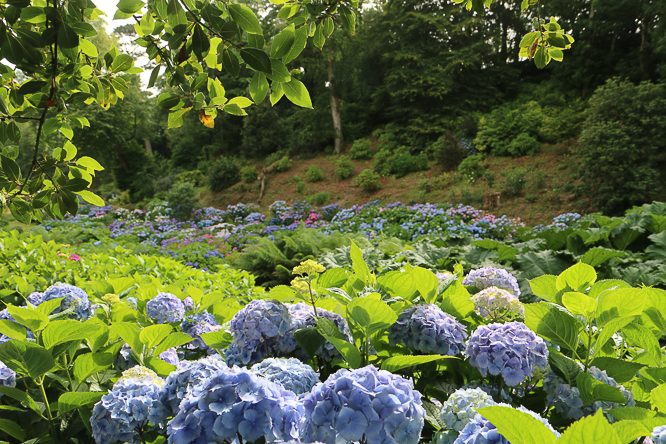 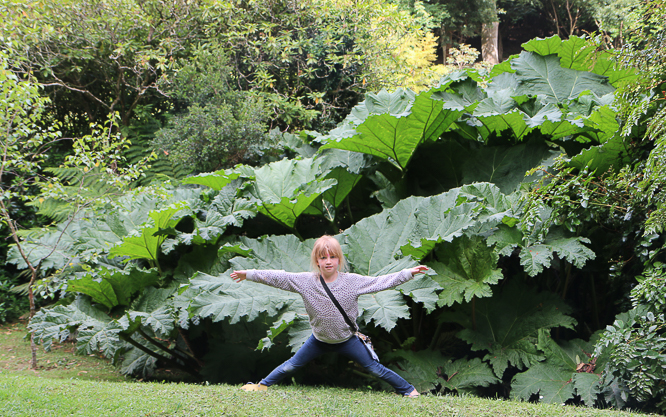 Coco pictured for scale purposes only.

Being dedicated food tourists meant we couldn't resist having one stand-out meal and we decided it was about time we tried Porthminster Cafe so we had a great day out in St Ives - well I say St Ives but actually we just went to Porthminster beach. With an unpromising weather forecast we set off for St Erth and caught the train along the coast to St. Ives. It was stunning. The tide was at its lowest - the creek at St. Erth was exposed with the odd boat stranded on the mud and then as the train weaved around the edge of the coastline there were golden sands everywhere. Once we arrived the sun was out so we set to sandcastle building - Hugh and me probably more enthusiastically than Coco and Henry; perfect for working up an appetite.  Lunch on the terrace at Porthminster was brilliant, I could see us trying to make it a summer tradition 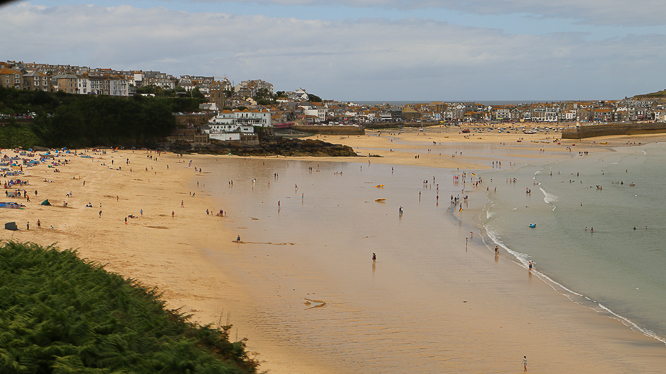 View of Porthminster beach from the train window. 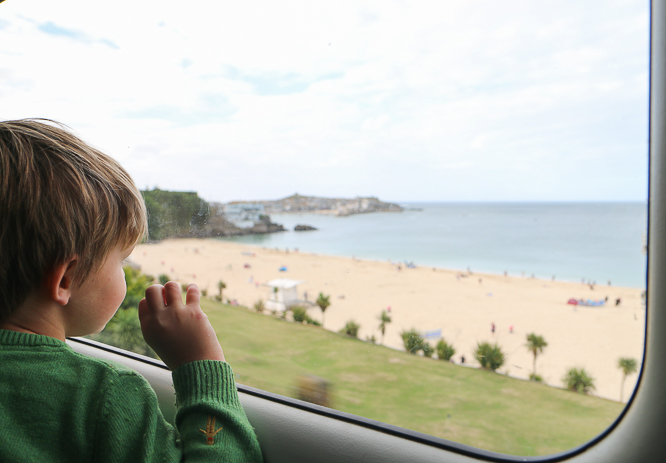 Henry loved the train journey (this is actually on the way back again - you can see the difference in the tide from the pictures above and below). 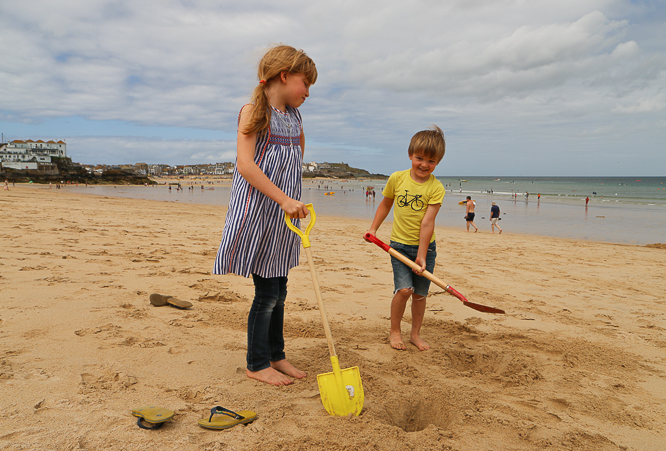 The very beginnings of the sandcastle, pre lunch... 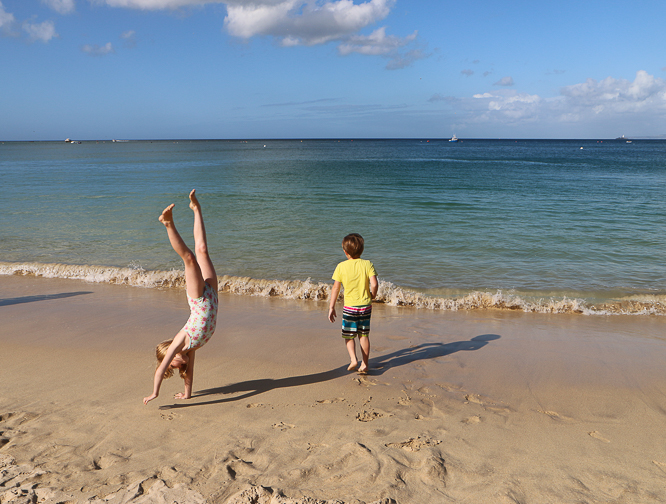 Sort-of the best summing up picture I could have hoped for - Coco doing a handstand and Henry too busy to stand still and look at the camera. All in all it was a lovely holiday - just the kind I'd love to have every summer.
Posted by Alexis at 19:07