Scenes from the Weekend

It feels like the weekends are becoming a tug of war between trying to get things done and trying to slow down and to just spend time together as a family.
This weekend was no different and it felt so typical of where we are right now... 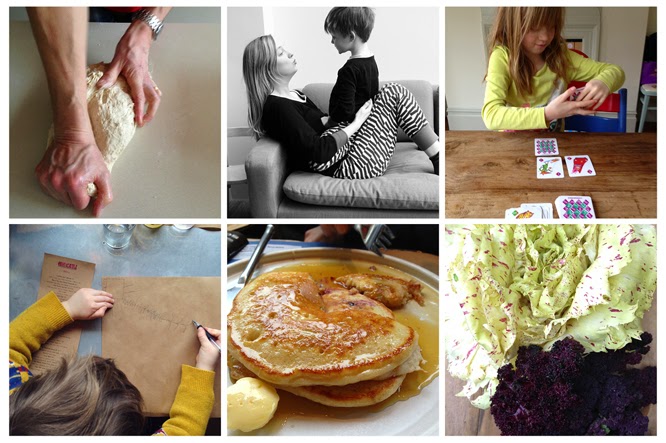 Saturday started slowly with the children playing downstairs and sorting out their breakfast... I was feeling vaguely fragile after a rare Friday night out. The morning was therefore spent in pj's (the best TBC pj's) with endless cups of tea. I was also reading our new cook book {a modern way to eat by Anna Jones}, and playing cards with Coco. Hugh was in the early stages of bread making.

After deciding on a couple of recipes I wanted to try from the a fore mentioned book we ventured out (which makes it sound easy, but writing a shopping list and getting four people dressed, and winter-ready always seems to take soooo long). By the time we finally left the house there was a certain amount of hangry behaviour coming from me. The fix for this was eating before food shopping so we went for an American brunch at Outsider Tart a local place which I really like, Hugh finds it a bit too quirky American, having said that he didn't want to share his chilli eggs with me. I particularly wanted to try their pancakes as we've been getting quite into our pancake breakfasts recently. The pancakes were suitably impressive - I'm not sure I'd have a hope of replicating them, partly as I probably wouldn't dare pour on quite such an enormous quantity of maple syrup; but I might still try.
So brunch turned into quite a lengthy affair - in a good way - but it meant that then the food shopping had to be squeezed in before getting Coco to a birthday party. Hugh and Henry went off to the butchers & supermarket while Coco and I headed to the green grocer. (Natoora, our local is great for stocking the harder to come by varities of veg).
Then it was time to take coco to her party... which was followed by the normal more cooking/eating etc. I managed to sneak off to bed early to read my book while Hugh happily continued faffing with his bread.
Day done: not much achieved - but some good hanging out. 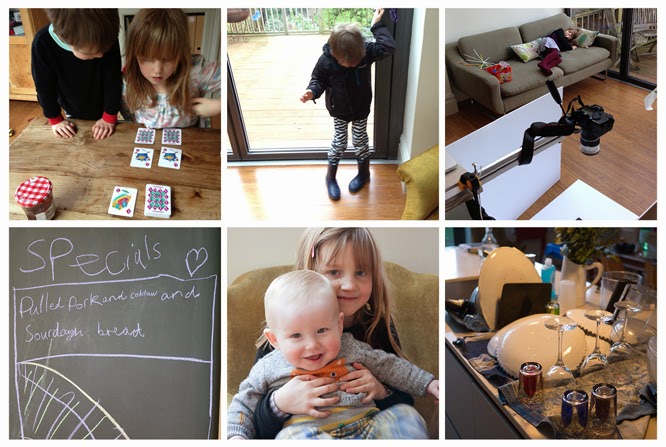 Sunday - I seem to be the one craving the lie ins at the moment where as Hugh was up kneading bread and prepping lunch ... I woke more gently with a cup of tea.
Sunday morning was where the stress kicked in. I was trying to do some 'studio style' photos for one of my many projects. Henry wanted to do either very loud activities or anything complicated for which he had to shout for help every two minutes. Coco had homework to do but was much more interested in helping to contribute to Henry's frustrations... Eventually we chucked them out in the garden and thanked our lucky stars for our soundproof double glazing.
Hugh of course was still making bread. It should really go without saying now that at most points during a weekend when we are at home Hugh is either involved in some stage of his bread making* marathon, or doing some kind of wiring based project. I meanwhile can normally be found lamenting the fact that I've done nothing except tidying. And the house is still a tip.
This is why it's normally a good idea if we just go out; however as we had people coming to see us this wasn't really an option.
Lunch got prepped - mainly by Hugh but partly by me, photos got done, just, and then friends arrived and lunch was enjoyed along with probably too much wine... Coco got all of us to play cards and then got cuddles with baby Frank. After the washing up was done we had a quick trip to the park in the fading light.
Last of all we lit the fire and watched the beginning of Willow (I used to love that film!) with Coco and Henry - then once they were in bed we caught up on Wolf Hall before bed.
Day done:  friends seen, food enjoyed, photos taken & school uniforms washed, recycling out, only lost my rag with children a couple of times. Mediocre hanging out time (ie was slightly tinged with guilt that I should be doing something else more productive).
Weekend finished and here we go again.
We are pretty lucky really.
And pretty normal.
I think. 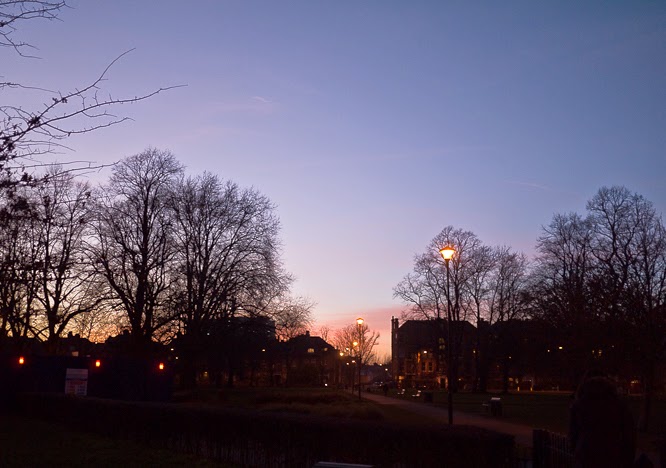 * Having enjoyed some delicious homemade sourdough bread today I should not be publicly complaining about this.
Posted by Alexis at 23:35