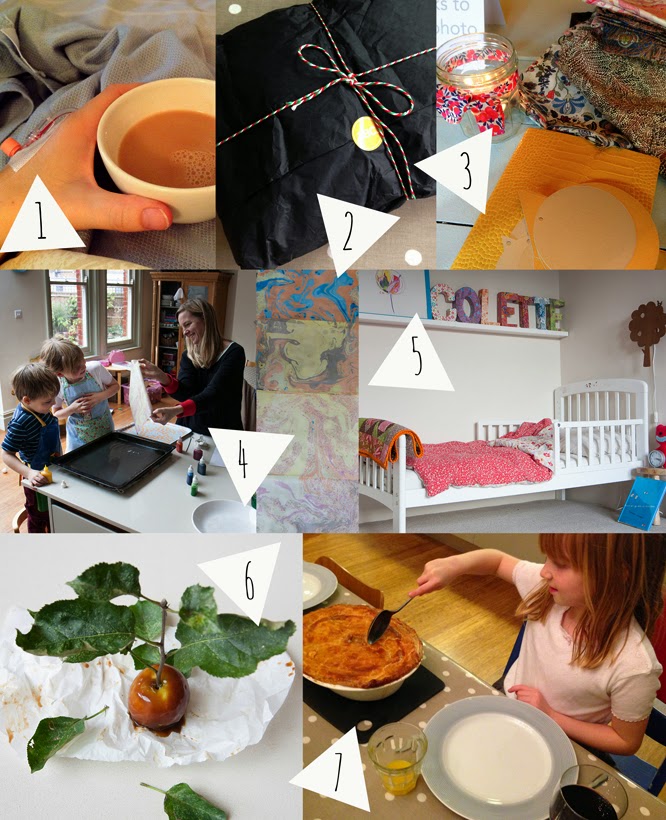 Considering I was house bound for the majority of last week I'm amazed I've managed to find so much to report on... but you know, online shopping, instagram and the like keep me very busy...

1. Last Monday started early, I was in hospital by 7am... I had a pretty straight-forward knee operation which I've been putting off for ages, but as is so often the case it really wasn't half as bad as I thought it would be...

2. I bought myself some pj's from The Bright Company (their first adult size pj's) to aid my recovery, *ahem*. Considering I've been sleeping in a rotation of the same two t-shirts since I was about 18 this felt like quite a radical move.

3. Yesterday I managed to hobble along to Liberty to do some seasonal crafting with a great bunch of fellow bloggers... watch this space for multiple Liberty print crafts in the near future. I was very inspired by all fabrics, loads bits & bobs (technical term!) from new online shop The Homemakery & mostly by the other people around the table who were all busy creating lots of Christmassy pretty things.
If you have the time make a cuppa and have a browse around these blogs - lots of creative women; Lotts & Lots, Apartment Apothecary, Growing Spaces, Lapin Blu, Lobster & Swan, Circle of Pine Trees, Little Green Shed, The Villa on Mount Pleasant, Geoffrey & Grace, Daisy Fay, Hannah in the House, Made by Molu

4. I was inspired by Charlotte (& her new blog -  it's so good to have her back in blog-land) to buy some marbling inks for the children (honest!) and we did a load of marbling on Saturday morning - (with me still in my new jim-jams). The results were great and to say they LOVED it would be an understatement.

5. Coco had her last night in her toddler bed (and Henry is his modified cot - yep, he's nearly four and still in a cot - be it with the side taken off) we finally bit-the-bullet and got them bunk-beds. I think I'm as excited as they are... also means we need to do a full room makeover, naturally.

6. The final toffee apple! We did it and they were delicious. I couldn't resist cutting a sprig from my apple tree today to set up this shot though... I'm just a faffer like that.

7. And finally, a proud parent moment. Coco announced on Saturday that she wanted to make a stew all by herself. Why she decided it would be a stew? Who knows... but we looked in recipe books together and she chose to make a beef and ale pie. And she did it, pretty much all by herself. In fact she got a bit annoyed when anyone tried to help her; except with cutting onions, she was quite happy for me to cut the onions after she got teary and cut herself with a sharp knife! I thought she'd quit right then (after about 5 minutes) but she persevered and the pie was delicious. She was rightfully pretty pleased with herself too.
Posted by Alexis at 22:08