The Wool Ride: A Leisurely Cycle Through London

Yesterday we had the pleasure of joining in with the Wool Ride - a lovely cycle through the middle of London in the crisp morning sunshine.

It was 95% wonderful and 5% hair-raising as we had both Coco and Henry cycling with us on the roads (we figured there was some safety in numbers with the other 300 or so riders and we both stayed very close to our children).

The ride was organised to mark the beginning of wool week so we all dutifully donned our favourite woolen items for the cycle. 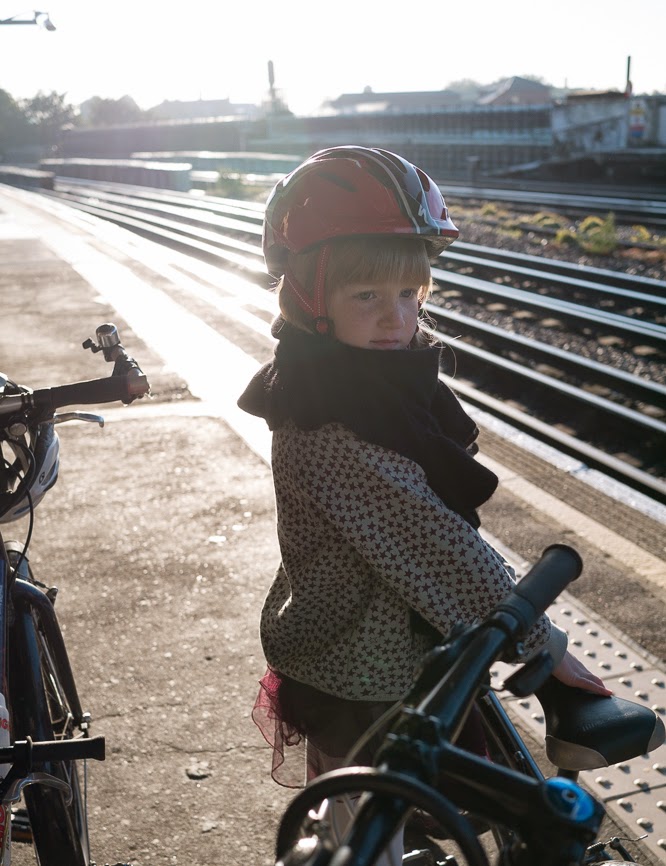 Coco waiting for the tube to take us to Potters Fields and the beginning of the ride - wearing one of my old favourites, a black cashmere scarf by Luella.
Underneath her (non-wool) Ruff & Huddle jumper Coco is wearing a wool dress with tutu skirt - perfect cycling attire for a six year old! 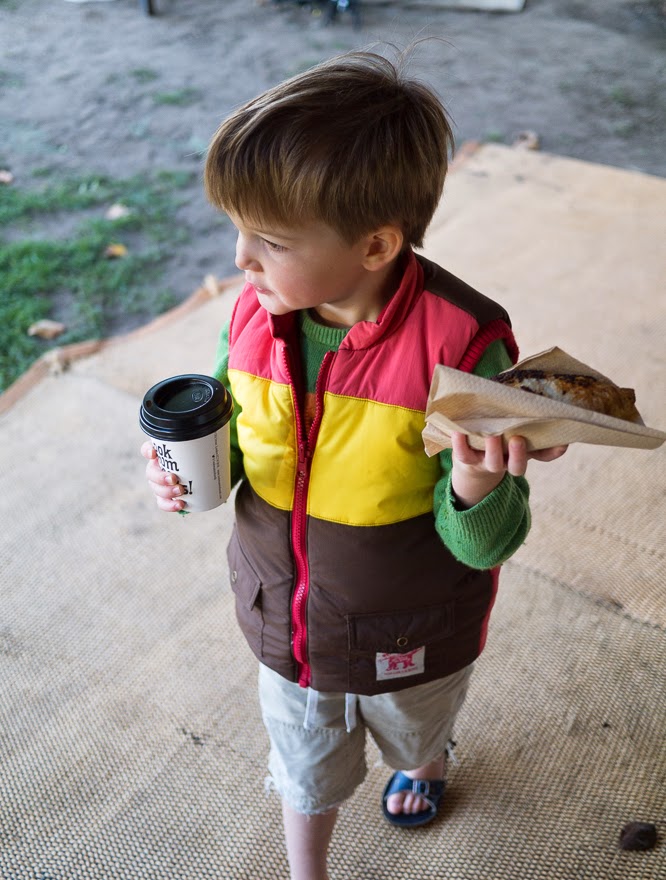 Henry with his coffee (well, hot chocolate) and pastry courtesy of 'Look Mum No Hands' wearing his Tootsa MacGinty hand-me-down foxy jumper and body warmer - he has been insisting on wearing his sandals everyday and I only just managed to get him to wear socks and shoes this morning... 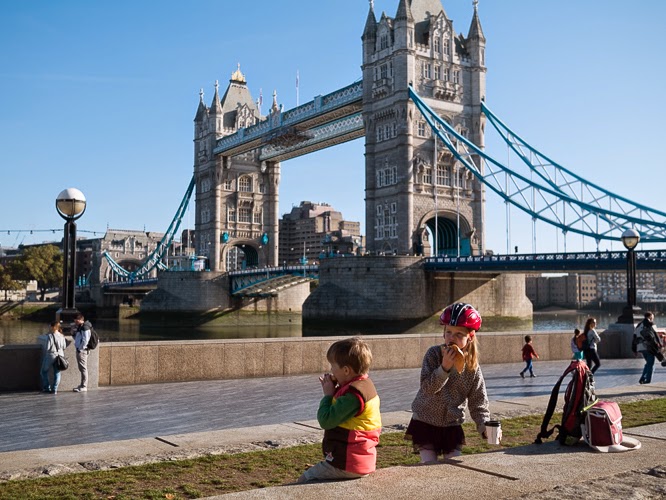 Getting fueled up with food prior to setting off... 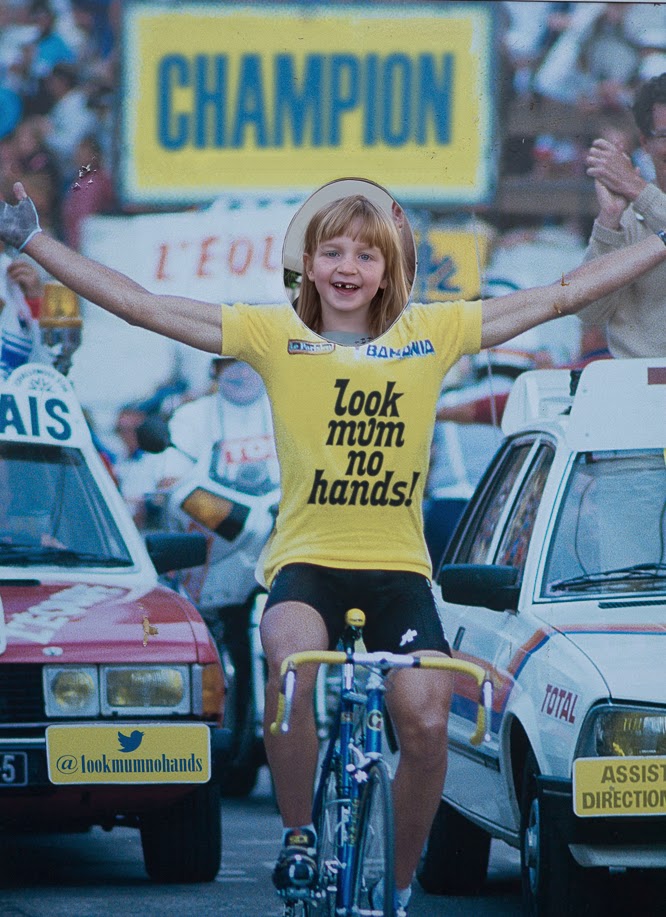 We had some family fun taking snaps, and checking out some live wool, aka sheep, while we waited for other cyclists to gather... it was such a beautiful morning. 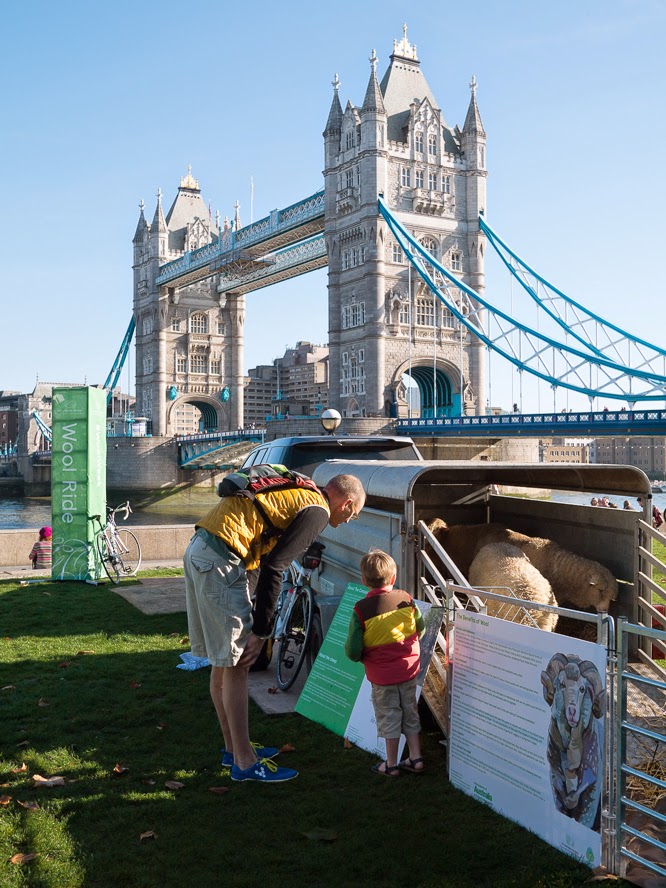 Hugh, who frankly has the most choice in our family when it comes to cycling clobber, wore for his merino wool top by On-one-bikes - and his Finisterre body warmer which was bought in yellow as it was on sale. Hugh's wardrobe is becoming increasingly brightly coloured as he pretty much always buys sale items which means he buys the item he likes in the colours no one else wanted. See the shoes below as example 2.
Hugh and Henry ended up cycling with people from Finisterre on the ride who were wearing some of their wool range... which no doubt Hugh is now after (just checked out the womenswear and it does look rather nice actually). 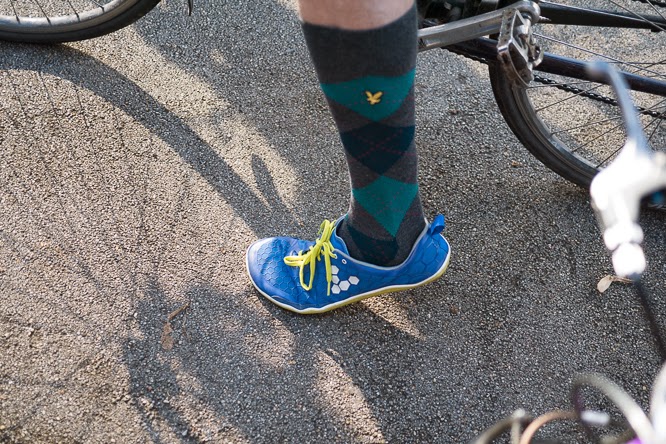 By some miracle Coco managed to win Hugh some Lyle & Scott* Argyle socks by getting a hole-in-one at the little pitch and putt challenge they had set up. I think Hugh was quite pleased to be able to put these straight on as it was a nippy morning... and I'd vetoed his original socks prior to departure. There's only so much Hugh-style I can take sometimes.
*(Lyle & Scott are offering 15% off on their website this week I see) 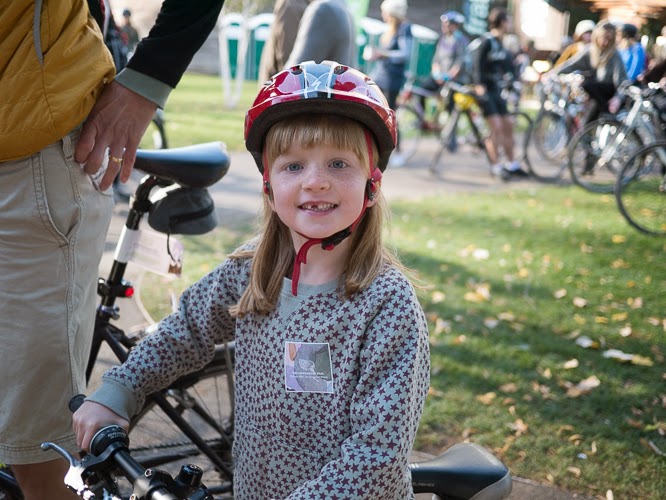 So, after food, golf, photos, sheep inspection and last wees we get to the actual ride.
The route was mapped out to wind it's way along the south bank, over London bridge, down the Stand, Trafalgar Square, Picadilly Circus, Regents St, Oxford St a bit of Mayfair and then into Hyde Park, Knightsbridge, Buckingham Palace and then Westminster before heading back over the bridge and back along the Southbank to Tower Bridge again. In total 13 miles.
Here's how we got on with our mini cyclists... 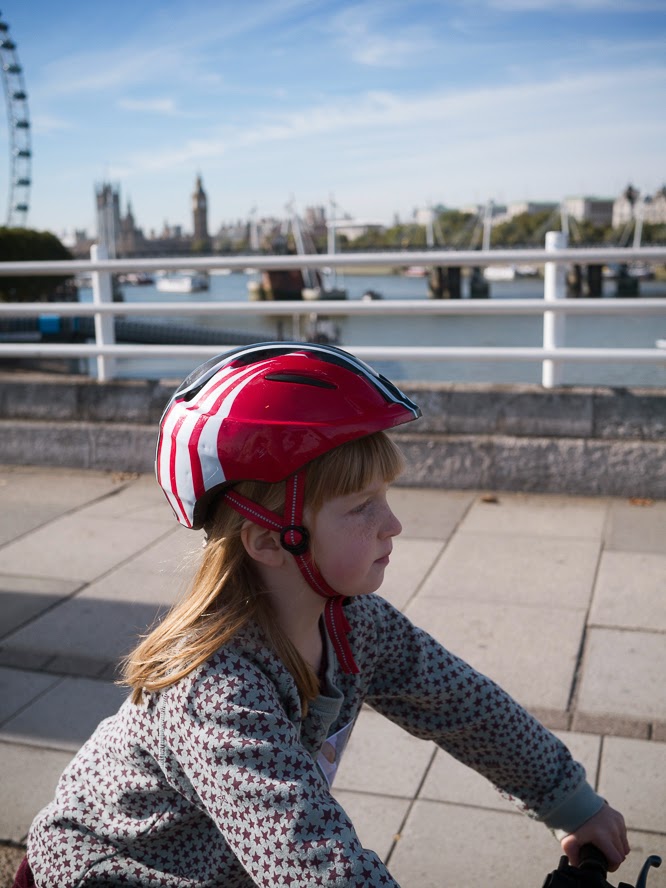 Still going strong after a mile or so as we head over London Bridge... (complete with Big Ben chiming in the background). This is the point at which Coco and I fell behind Hugh and Henry - partly as I was faffing trying to get this photo! 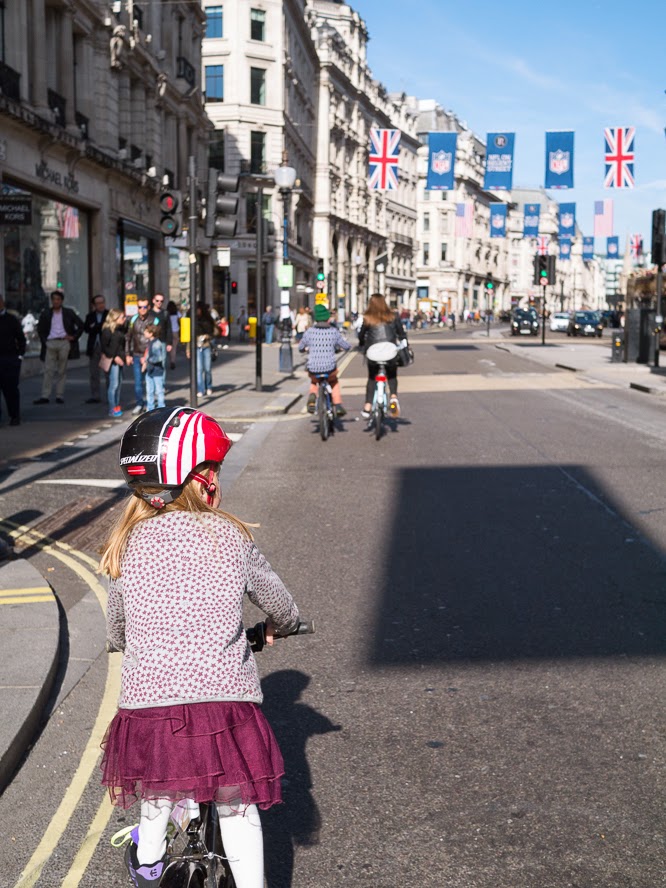 Regents Street - on the traffic free stretches we just cycled along chatting - a bit like you can see the couple ahead of us doing. I'm not sure Coco really understood what a novelty the whole ride was - but she certainly enjoyed it... 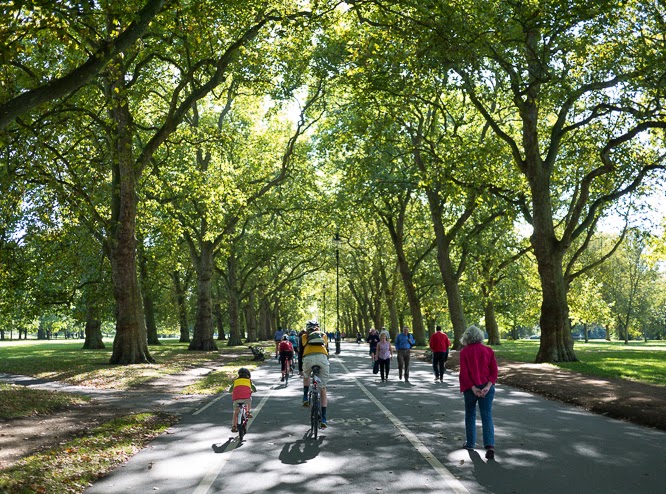 Meanwhile Hugh and Henry were charging ahead - they waited for us just before we got into Hyde Park for this lovely gentle downhill stretch... this used to be part of my daily commute. 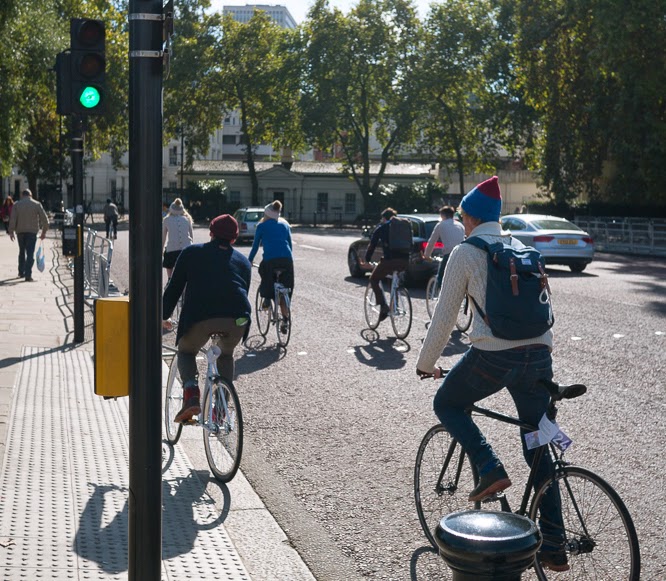 Once we got to Buckingham Palace Coco's energy levels were waning so we broke off from the ride and went down the Mall instead making our way back to embankment tube station... 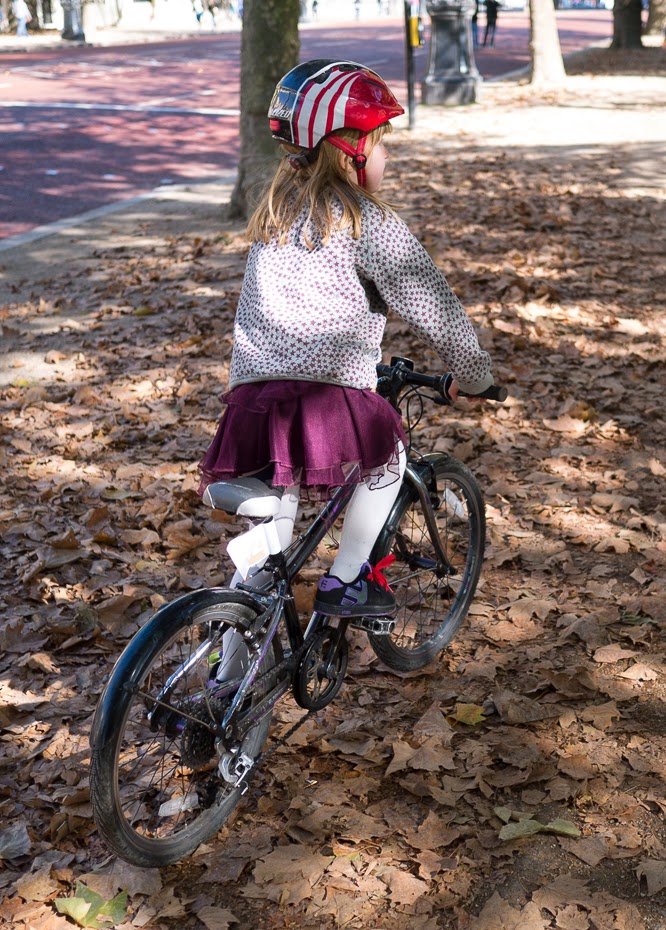 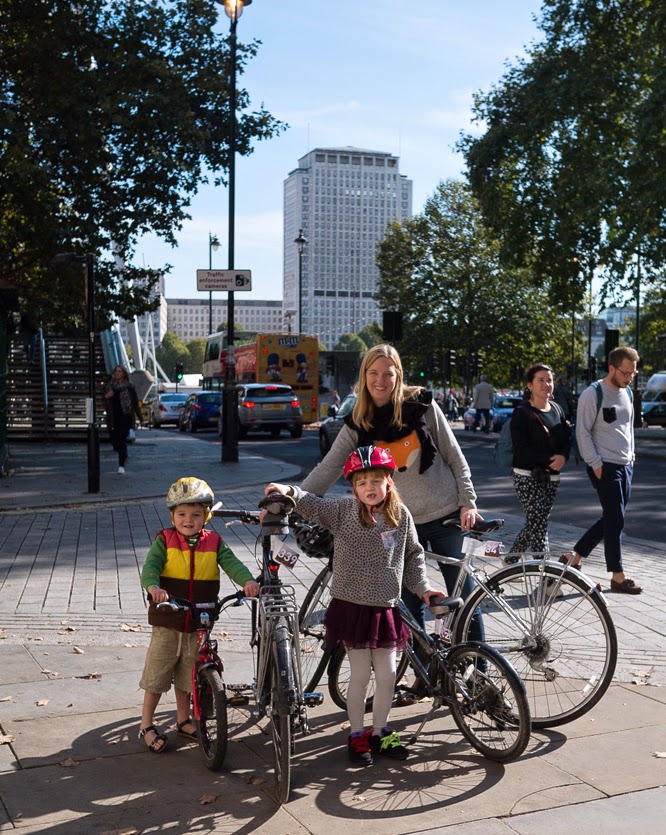 After 9 miles of cycling Hugh took a photo with me in it - as you can see I was also wearing my foxy jumper by Tootsa MacGinty... it was a tough choice as I'm really rather partial to a woolly jumper! 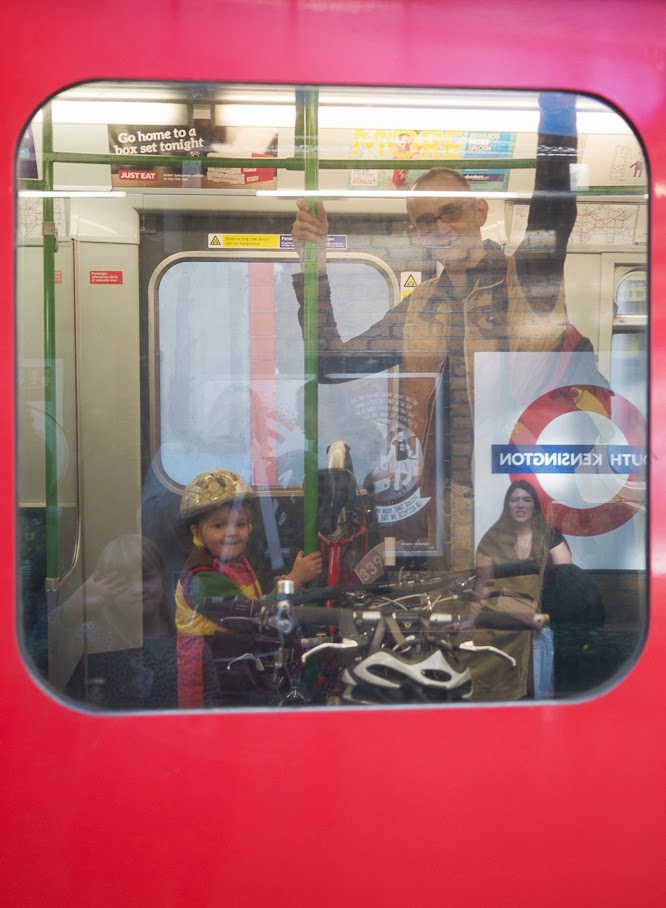 Saying goodbye to the boys - amazingly Hugh managed to get Henry and four bikes home - then they went to the pub... meanwhile Coco and I went off on another adventure. But that is a tale for another day.

It was such a pleasure to take part in this event - thank you very much to the folks at the Campaign for Wool for inviting us along - I can't quite believe how far our kiddos managed to ride.
Posted by Alexis at 18:26